US TV show appearance this weekend

Since “Ben Fogle: New Lives in the Wild” first aired two weeks ago (21st February 2014) we’ve been a little snowed under with emails and messages. The response and the comments have been overwhelmingly positive and supportive, and it has been a real pleasure to interact with so many wonderful people.

The island gets another TV airing this weekend, this time in the States on HGTV’s popular property show “Island Hunters”, which is a spin-off from the hugely successful “House Hunters International”. 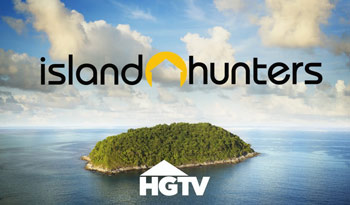 Our invite to appear on the show came about when our neighbours Rick and Sherry were contacted by the HGTV production team. They had been selected to feature in the show as they looked for their own little piece of Caribbean island paradise. The show recreates a dramatised version of their search for and purchase of their own private island property here.

For the show they needed two other island properties to view, and Sherry called to ask if we would like to have our island featured on the program. As I was planning on listing my property at that time I was of course keen to have the place included.

Another neighbouring island made up the set of three properties for the purchasers to view.

Unfortunately we weren’t able to be here when the crew turned up to film, which was the week after Ben Fogle and the crew had filmed at our island. By then we had headed out to Europe so I could speak at the TEDx event in Vienna.

I don’t think we’ll be able to get hold of a review copy of the show for about a week or so after it has aired, so if you do get to see it, let us know how the island looked.

The first airing of the show is 10.30pm on Sunday 9th March on HGTV in both Eastern and Pacific time zones.