The Economist Intelligence Unit’s LIVEABILITY RANKING, part of the Worldwide Cost of Living Survey, assesses living conditions in more than 125 cities around the world by looking at nearly 40 individual indicators grouped into five categories: stability; healthcare; culture and environment; education; and infrastructure.

Canada and Australia feature the most attractive destinations in the Economist Intelligence Unit’s ranking of cities’ liveability worldwide. Cities with the best scores benefit from relatively low crime rates, little threat from instability or terrorism and well-developed infrastructures. Vancouver comes out on top, as it has done in previous surveys.

The Economist Intelligence Unit’s Liveability Index quantifies the challenges that might be presented to an individual’s lifestyle in any given location, and allows for direct comparison between locations.

Click the thumbnail below to see a larger picture:- 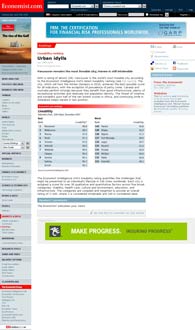 You can see the actual article online here:-
Liveability ranking