36 days to go!! Tattoos and piercings.

Like most people, over the years my body has been subjected to injury or change. Some things are unintentional – a broken collar bone here, a scar there – but other “modifications” are more deliberate.

When I was at college in Liverpool I had a tattoo done on my shoulder and in more recent years, I had my tongue pierced.

As many people have suggested about my current auction, a couple of friends suggested the tongue ring may have been a small scale mid-life crisis action! I was into my forties at the time, after all! Perhaps so, but I enjoyed the surprise some people showed when they realised that I had a tongue ring.

I wore it for about two years, and took it out at a party a while ago to swap it for another one. I didn’t like the new one, and soon took that out. I haven’t put it back in since, and I think my tongue ring days are behind me now.

It would be a bit difficult to leave my tattoo behind without some gory surgery but I will be leaving the two tongue rings, which I no longer use, as part as the contents of the house. 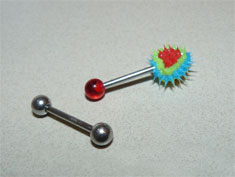 The silver stud was the one that I wore all the time, and when I decided to change it for the coloured one at a party one night, two of my friends had to get tools out of the shed to get it out. We had all had a few drinks by then, and I suppose it could have turned into a bit of disaster. However, all worked out well and they successfully removed it and replaced with the other one.

The multi-coloured one, I only wore briefly that night because it felt so wierd. It’s bright colour and shape certainly made it noticable.

So nowadays I don’t use either tongue ring, and on the day I walk out of the house, I will make sure I leave both in the bathroom. The new owner of my life can do whatever he/she/they like with them – throw them away, sell them on eBay, or just leave them where they are in the bathroom cabinet!