When I first arrived in Perth to live six years ago we moved into a big shared house by the ocean in City Beach. One of the guys who lived there, Craigo, was a big fan of Australian Rules Football, or “Aussie Rules”. His team was the Fremantle Dockers, and he was a keen supporter, often going to matches at Subiaco Oval.

I watched a couple of games on the TV, and was a bit mystified as to what the rules were, and what the players were trying to achieve, but Craig sat down and gave me a run through of the plays, and it all started to make sense.

Craig insisted that we should come along to a couple of games at Subi, and we did so a few times during the year we lived with him. I became a Dockers supporter by default.

I haven’t been to a live game since then, but Scott and Janine, who are currently staying with me, were keen to see a game (I think Scott more so than Janine), so along with Mel and her kids we took the train up to Subi.

The kids were amazed by the size of the crowd, and despite our seats having somewhat limited visibility (we were lucky to get them at all pretty much last minute) we all thoroughly enjoyed the game.

“Carn the Dockers!”, shouted at high volume with an Australian accent can be translated as “Come on the Dockers!” Unfortunately, all the shouting in the world was no help today. Ten minutes into the final quarter the Dockers were up by 18 points, three goals, with only 15 minutes to go! And yet once again they somehow managed to snatch defeat from the jaws of victory!! The Dockers lost to the Western Bulldogs, by 114 to 111!

The scorelines in AFL are amazing, as it is such a fast moving game, and the crowd gets thrill after thrill as the goals stack up.

It is all such a great family-friendly atmosphere, and opposing team supporters happily sit together in friendly rivalry. 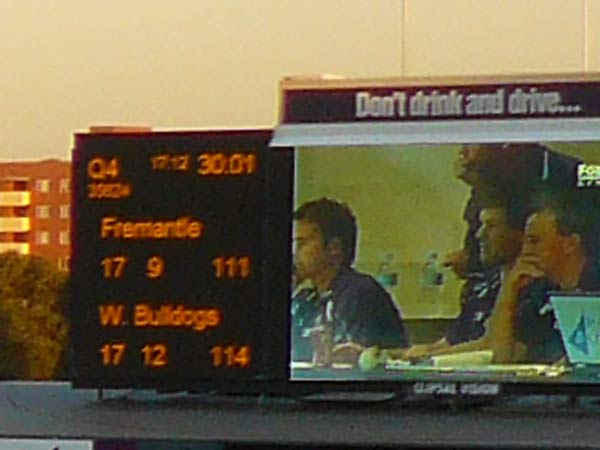 Find out more about AFL (Australian Football League at:-
http://www.afl.com.au/

and more about Freo Dockers at:-
http://www.fremantlefc.com.au/