I have been talking to a very helpful representative from eBay in the build up to the auction, and it was suggested that I run a pre-approval process, much like many higher profile auctions do, such as when Scarlett Johansson auctioned herself for a date. (Hey, now there’s an idea… 🙂 I believe the final bid was over $40,000!!) 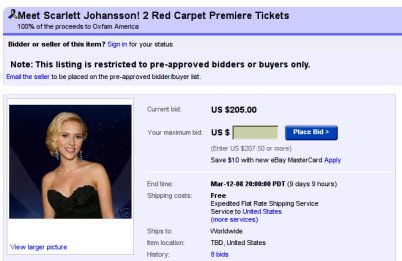 This will mean only allowing people to bid if they have been pre-approved.

It is unfortunate that I even have to consider doing this, but it is obviously necessary in order to try to avoid fake bidding. Hopefully any serious bidders will appreciate why this has to be done, as it is for their protection from the idiots among us who take pleasure in spoiling things for other people.

Good luck if you are planning on bidding.