At the end of last year I went to Tasmania for my friends Chris and Jase’s wedding. I had never been to Tasmania before, so decide to stay there for a few extra days, and hired a car and drove around for five days or so.

It is a beautiful place, very mountainous and rugged, with some amazing scenery, and so well organised for people to travel around, with beautiful free camp sites right on the edges of stunning deseted beaches.

The Thylacine was a marsupial, having a pouch like a kangaroo, but was much more like a dog or wolf, although completely unrelated to either of these. Sadly, because it was carnivorous it came into conflict with early settlers in Tasmania, and like most other animals that conflict with human interests, it did not come off too well. 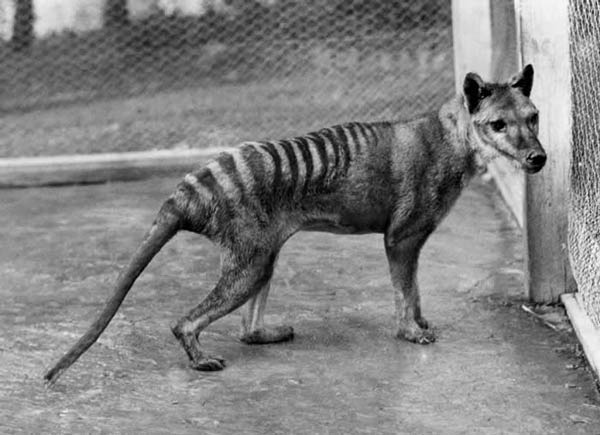 …from Wikipedia…
“Although long extinct on the Australian mainland by the time the European settlers arrived, the Thylacine survived into the 1930s in Tasmania. At the time of the first settlement, the heaviest distributions were in the north-east, north-west and north-midland regions. From the early days of European settlement they were rarely sighted, but slowly began to be credited with numerous attacks on sheep; this led to the establishment of bounty schemes in an attempt to control their numbers. The Van Diemen’s Land Company introduced bounties on the Thylacine from as early as 1830 and between 1888 and 1909 the Tasmanian government paid £1 a head for the animal (10 shillings for pups). In all they paid out 2,184 bounties, but it is thought that many more Thylacines were killed than were claimed for. Its extinction is popularly attributed to these relentless efforts by farmers and bounty hunters.”

The last known surviving thylacine died in Hobart Zoo, and there is some black and white footage of this last survivor, which was filmed in 1933. Allow me to introduce you to Benjamin:

There is a lot more detail on Thylacines at Wikipedia, which suggests that Benjamin may have been a female, or at the Australian Museum website.

But now there is new hope for the long-lost Thylacine, as scientists at the university Melbourne have managed to put thylacine DNA into a mouse embryo in what the university’s Dr Andrew Pask says is the first time DNA from an extinct species has been used “to induce a functional response in another living organism.”

The article makes fascinating reading, and there are some interesting discussion points raised in the comments afterwards. There are some very entertaining comments too. These are a few that I liked:-

“I would just love a big striped mouse that could devour next door’s bird killing bloody cat.”

“I live in hope for one day I might actually get to taste some Dodo.”

“Lets hope these mad scientists have another team working on building a better/stronger mouse trap.”

“It’s all ok…
They’ve all got degrees… it’s being done by a University… all possible precautions are being taken.
Nobody should have any concerns. These people are professionals.”