To become a publisher is relatively easy, depending on where you live. With my home base being in Australia formalities were minimal, and eventually I set up Wider Vision Publishing, in order to be able to deal direct with my Print On Demand (POD) print and distribution company.

It took quite some time, however to register with the POD company, and there are a few hoops to jump through. Finally though, as far as they were concerned, I was a publisher.

At the same time I had been working on the files for the book, trying to ensure that they met the printer’s exacting standards. The whole process took around a month all-in-all, but I was finally ready to submit my two files – cover and content – to the printer.

The files were accepted, and setup fees were paid, and before too long my proof copy was mailed out to me for final approval. I opened the package when it arrived with a mixture of excitement and trepidation. This was my telling of a story that had been in the creation phase for around three years. I had been working full-time on the project for the previous five months, and at last I was finally going to see the very first copy of my book to be printed.

It looked exactly as I had hoped and imagined it would. I was incredibly proud of what I had produced. The print quality of both the cover and the contents is fantastic, and is indistinguishable from a book you would buy from the shelves any bookstore. It is an incredibly professional-looking, high quality end product.

Within a day or two of my acceptance of the proof copy the book appeared on Amazon, and over the following days started to pop up all over the place.

Just as I would have had to do if I had been accepted by a traditional publishing house, my task, now that the book is available all over the world, is to publicize it. But the beauty is that I receive about $6 from each sale, as opposed to perhaps a dollar per sale. I only need to sell about one sixth of the number of books to make the same income.

One such example is Yvette Francino. Our paths first crossed online, and we eventually met in Los Angeles in November 2008. I was honoured to become part of Yvette’s adventure, and ultimately included in her book, “The Laptop Dancer Diaries”

as “Mr. November”. We have kept in touch, and met again a couple of times since then, and she gave me many tips and assistance as I worked on publishing my book. 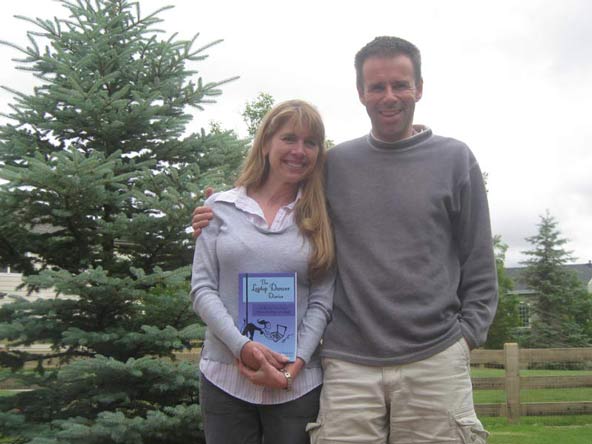 More recently, as I passed through LA, and stayed with my friend, and internet publicity guru Evan White, I was introduced to one of his buddies, Kyle MacDonald. You may remember Kyle as the guy who started out with one red paperclip, trading it for increacingly bigger or better items, until he eventually traded up to a house.

He published his book, “One Red Paperclip”

, via more traditional publishing channels, and it was an honour to make a trade with him, swapping a copy of my book for his. I think we came out about even! He’s a fun guy. 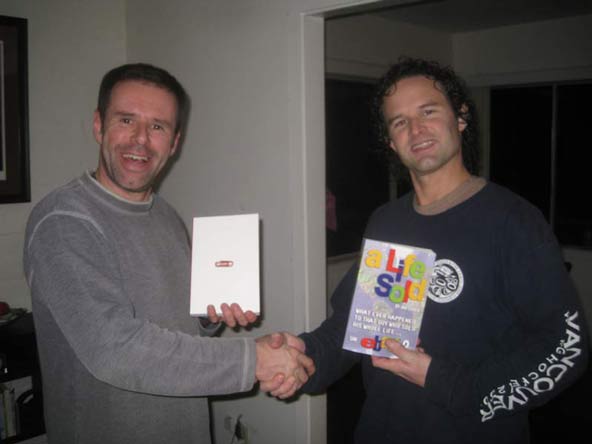 There are many others out there with similarly unique, adventurous, exciting, quirky and inspirational stories. Further examples might include, but is certainly not limited to:-

by Elizabeth Gilbert
(Marriage crisis leads to worldwide journey in a search for answers and meaning – sound familiar? I could use that overview as a description for my book too!)

by Danny Wallace
(English book by a guy who decides to say “Yes” to everything! The Jim Carrey movie of the same name was based on this book – the book is FAR better!)

Honeymoon with My Brother

by Franz Wisner
(Another story similar to mine, in which the author is ditched by his wife-to-be just hours before his wedding. He ends up going on the already-booked honeymoon with his brother, and then decides to continue travelling for a further year.)

Are You Dave Gorman?

Since finishing my travels, and ending up in Whitehorse in Canada, I have been able to host other travellers passing through, much as I was assisted many times by strangers on my long adventure. Several of these have also been working on their own manuscripts about their adventures.

So it occured to me that as I am already set up as a publisher, it would be a relatively easy process to assist others to get their work into print. And that is now what I am hoping to do with Wider Vision Publishing. I plan to focus almost exclusively on travel, adventure, and inspiring personal journeys. I only intend to publish a few great stories, whenever I find them.

However, more recently it occured to me that there must be so many more people out there with all sorts of books, either finished, or in progress. With everything I have learned recently about publishing, perhaps I could help them get their work in to print?

If you have something you think would be worth publishing, read the next blog, “A publisher’s journey (Part 4)…”
To be continued…

How exciting to see me out here with you, Ian! Thank you so much for the plug and congrats again on the book!

Actually, I had planned to dedicate a post to your book this week on my blog as well. I've started a new "Love Project" (in hopes of another book) and this week the theme is goal-setting. Your travels and book are the perfect examples.

And I will get to that Amazon review as well!

Hi Yvette,
Good luck with the new project, and the new book – let me know how I can follow.
ian

Hey Ian,
I finally got up the blog post: http://singleagainonlinediary.blogspot.com/2011/01/life-sold-book-of-100-goals-in-100.html

and review on Amazon. Great book! Very nice accounting of the behind-the-scenes story. Really quite amazing. And I can't believe I was in it 4 times! (Is that enough for Meg Ryan to play me in the movie?)

I feel very honored to have been a little part of a very big adventure.

Thanks Yvette,
I'll get my people to contact Meg's people!
See you on set!