On the road again…

Well, my time in Canada is now at an end, as I only had a six month tourist visa, and that was due to expire in early January. My original plan had been to head south around mid-October, but the book-writing took a little longer than I had originally anticipated. I kept extending my stay, and as the end of the year approached, I decided that I wanted to stay for Christmas, and spend the holiday with Moe, Finn and Maible.

This is the picture we used for the family Christmas card – taken on a “warm” -10 deg C day! 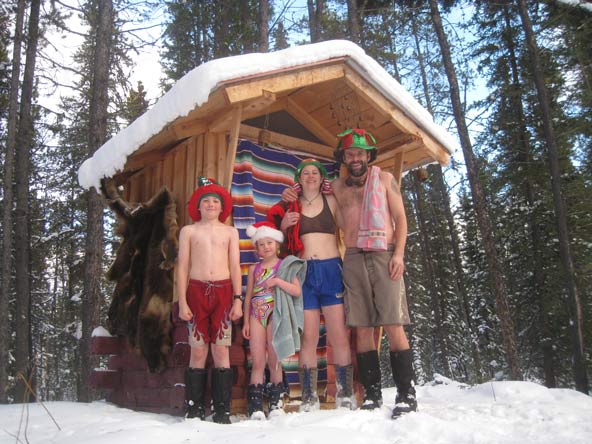 Moe’s sister Rainey arrived for the week with her two kids, Wynn and Aslin, and the seven of us managed to enjoy a fun-filled week in the little cabin.

I have an invitation to a wedding in New Zealand in February, and am acting as best man for my buddy Bruce in March in England, so very soon after Christmas it was time to hit the road again.

Moe dropped me off at the airport in Whitehorse on a very cold morning, and we said our sad farewells. We plan to meet up again towards the end of March, hopefully for a month or so of travelling together.

My first flight took me south to Vancouver, and a connection took me onward to LA. I caught the airport bus to Van Nuys, where my friend Evan met me. It wasn’t long before we had a couple of beers in hand at his new place right on the beach.

It is quite a shock to the system to be somewhere where a t-shirt is adequate for daytime, and a light jacket is all the extra wear that is needed for the evening.

On the evening I arrived we constructed Evan’s new “Ball O’ Fire” enclosure, in which he had just invested, planning to use it for his New Year’s Eve bash. We had to test it out, of course!

I’m here until 3rd or 4th January, and then fly direct to Auckland, where I plan to spend a couple of months exploring New Zealand, and enjoying some sunny southern-hemisphere summer weather.

I hope you all had an equally wonderful Christmas, and are looking forward to a fantastic New Year. I am certainly excited about new adventures that 2011 may offer.