Lancy and I had discussed a trip to a much older section of the Great Wall, which she referred to as the “Wild Great Wall”, but in the early part of the week the weather was deteriorating, eventually ending in Thursdays’s big snowstorm, which ironically was the day I decided to go to Badaling to see that part of the wall on my own, resulting in quite an adventurous day. When I saw the newspaper on Friday morning, it said that it had been a bad day, several people dying under colapsed roofs, and the government declaring an orange alert! What a day to pick to go on an expedition!

Friday morning though, as forecast, was warmer and there was a beautiful clear blue sky. I went out on the bicycle again (I’m like a local now) to buy some breakfast and some supplies for the day, and packed my bag.

I caught the bus to the long distance bus station, where at 1pm I met Lancy as we’d arranged. A couple of hours on another bus would take us to Miyun, but our adventure started early, when our bus, which had been smelling strongly of burning gearbox oil for quite some time, finally ground to a halt!

In the process of moving on to a new bus, we somehow managed to end up with an old lady practically attached to us, probably because I was the only foreigner on the bus. She kept telling us we should get off the bus early to catch a taxi to the Great Wall. We ignored her suggestion, as Lancy made some enquiries with other people on the bus, giving us better information. It is very nice to have a Chinese-speaking person with me.

At Miyun our old lady continued to shadow us, babbling incessantly at poor Lancy, trying to convince us the only option was to pay 300 Yuen (about $42) for a taxi! At the small tour shop that runs the local bus, bad news! No more buses were running, as it was Friday afternoon – not sure about the logic of this really. However, our old lady seemed more optimistic about her chances, but she was really starting to bug us.

Eventually Lancy produced results, and we were told where to go to get a shared minibus or taxi. We finally shed our old lady when she realised we had solved our problem, and some tough negotiations later we were on our way to Jinshangling, for the much more reasonable price of 50 Yuan ($7) for us both.

At Jinshangling, where the temperature was bitterly cold, we found some reasonable accomodation for 55 Yuan each ($8), which again after some negotiation, at which Lancy was quickly becoming very good, would include dinner and breakfast.

In the morning we got up fairly early, and after breakfast made our way up to the wall. The sun was out again, and we started to warm up a little as we climbed out of the valley shadows.

Up on the wall itself the views were stunning, and we could see the wall snaking off into the distance over the mountains in both directions, each mountain peak having a watch tower perched on top.

The day couldn’t have been better. The sun was out, and there wasn’t a breath of wind. The wall still had an icy covering of snow on the top, making it look stunningly bright. And best of all, because we had arrived the day before and got a good start, we were ahead of any of the tour groups that would be coming along later, and literally had the whole wall to ourselves for as far as we could see in either direction.

Our route would take us along the wall for about 10 kilometres, up and down the mountains, passing through the watch towers on each summit. Every step of the way offered the most amazing photographic opportunities – the views were gorgeous.

Some parts of the wall were pretty well maintained, but some parts were crumbling away, and at the steeper sections, especially covered in snow and ice, it was pretty treacherous, but we took our time, and had no real problems.

We walked for around four hours through the most incredible, wonderful landscape, and I tried to explain to Lancy how this absolutely perfect experience exceeded all my expectations about what it would be like to walk on the Great Wall. It truly was one of the finest days I have ever spent in the mountains. We were both very happy that we had made the extra effort to make our own, individual trip, rather than join a larger group on an organised tour.

We didn’t hurry, and sat for a while eating our supplies and admiring the view. After a little over four hours, which seemed to have passed in no time at all, we crossed a suspension bridge over Simatai Lake, and descended from the wall down into the small town of Simatai itself.

More negotiations got us a reasonable taxi back to Miyun, and we caught the next bus back to Beijing. At the main station there Lancy and I parted ways, as I headed back to the hostel and she headed home. I will be eternally grateful to her for being such a great tour guide, interpreter, companion, and all round entertainer – I couldn’t have asked for better company on such a marvellous adventure.

I had a quick shower at the hostel, grabbed my bags and hit the road. Time to leave Beijing, and head for Thailand next. Thanks again to Lancy for her help and advice in many of the things I did in Beijing. Thanks also to all the helpful and friendly staff at the Sitting On The City Walls Courtyard Hotel, which was a great place to stay right in the centre of Beijing.

I really have had a fantastic time here, and certainly hope to be back to see more of China. What a fascinating, friendly, fun place to visit. 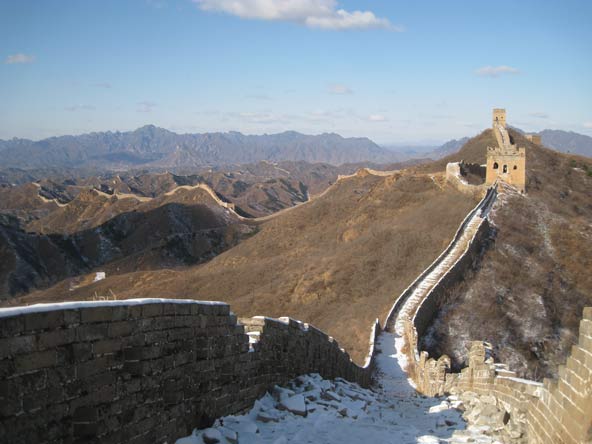