I still had a lot of things that I wanted to see in Las Vegas, so on my last day there I was up early and headed out to Red Rock Canyon, which is just a few miles to the west of the city. From Simon and Myles’s house it only took minutes to get there, and yet it is a world away form The Strip! Las Vegas is quite an unusual place, in that it is very built up as far as they can build, right to the foot of the mountains, and then just stops, where building is no longer possible.

Red Rock Canyon was quite busy, being so close and so accessible, but it was nice to be able to get out into natural surroundings so easily.

In the afternoon I met up with Misty again, as she had a day off work, and had offered to give me a guided tour around The Strip. At her house I finally got to see the painting she had done, inspired by my “ALife4Sale” project. She had emailed me way back in March or April, telling me about her idea for this painting, and later had sent me a photo of the finished work. You can read more about it in an earlier blog here.

It was fantastic to see the painting in real life, and I felt pretty flattered that someone half a world away from where I lived had taken such inspiration from something I had done. It was very satisfying to actually meet Misty and see the picture. 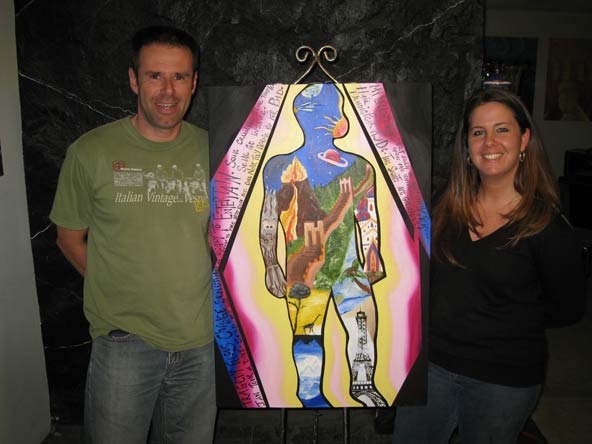 So I had added Misty to the list of people I wanted to meet when I set off on my travels, and she is actually about the seventh person that I have met who I have come into contact with through putting my “life” up for sale. Being a bit of a gambler (she plays a lot of tournament poker!), she insisted on being counted as lucky number 7. So she has actually become an integral part of three of my goals:
1). Seeing Las Vegas
2). Meeting ten new people from ALife4Sale
3). Entering a $1,000 poker competition

We headed down to The Strip as soon as it started going dark, and the first place to visit was the Stratosphere, a tall tower offering great views of The Strip, and with a couple of pretty wild fairground-type rides on top of the tower. We bought tickets and went on X-Scream, a sort of see-saw which tips you right over the edge of the tower. It was pretty intense.

After dinner at the restaurant where Misty works we headed out to see more casinos, including a circus show at Circus Circus, the pirate show at Treasure Island, the pyramid-shaped Luxor, and the best of all, the water fountains at Bellagio.

Misty gave me a few pointers on poker etiquette, and a few suggestions on how best to prepare for a bigger tournament, and I reckon she would make a great coach for that goal, which I may aim to achieve sometime next year. Hopefully we might be able to play a bit online over the coming months!

Las Vegas is certainly a different, and much more enjoyable place to look around with someone else, rather than on your own, and I had a much better impression of it on my last night out there than I did on my first!

Viva Las Vegas! Huge thanks to Simon and Myles, and to Misty too, for being such great hosts, and helping me achieve my goal of gambling in Las Vegas.