From Chamonix we drove through the Mont Blanc Tunnel, 17 kilometres long, and came out on the other side in Italy. Another amazing feat of construction!

We arrived in Santa Margherita Ligure at about 5pm. I had imagined it would be a small quite fishing village nestled on the coast, with perhaps a few tourists wandering around. How wrong I was!

The place was absolutely packed! Cars, bikes, mopeds, cycles and pedestrians all jostled for space in the tiny streets. It seemed like chaos! We drove around for some time, but could not find a parking space anywhere. Every conceivable place to park a car was full, and a few more places too where I would not have thought you could even fit a car in. Every other space not big enough for a car was filled with mopeds and scooters.

We tried up a side street, which quickly turned into a twisting road up into the hills, far too narrow to turn around too come back down. We eventually found our way back to the coast, and finally found a space we could fit the car into. The guys we were parking in front of looked very nervous, and actually came out of the shop to move his car a bit to avoid tragedy!

We went and introduced ourselves at the dive shop, and got directions to a campsite, which was apparently “almost full”. When we arrived at “Miraflores Camp Site”, hidden away in an industrial estate, they managed to cram us in on a gravelly patch down at the back of the park. Later that evening, despite being “full”, we saw them manage to fit in four more tents and a huge caravan!

To say it was the worst campsite I have ever stayed at would be a major understatement. We were relieved of 22 Euros for a patch of gravel about ten metres from the freeway that ran alongside the campsite. We had to pay extra for a card to access a hot shower. The place was jam-packed full. And it was in the middle of an industrial estate. There was a small swimming pool, proudly advertising “Free Entry”, but that was locked up before we even had our tent set up!

The only thing the place had going for it was it’s small restaurant – there was nowhere elso to go – they had a captive audience! They did a pretty good pizza, and the wine by the caraffe was very cheap. There was nothing else to do but hope that enough wine would help overcome the freeway noise!

We drank a fair amount, and actually found the whole campsite experience quite enjoyable, it was so bad it was good. After dinner we took a walk throught the industrial estate, and admired the local petrol station, and had an early night.

We were glad to pack up and leave early, and headed off to the dive shop. There we geared up and climbed aboard the boat, which took along the beautiful mountainous coastline.

There was a bit of doubt among the dive crew about whether we would be able to do the dive that we wanted, because of sea and wind conditions, but we hassled them a bit, explaining that we had come to see the “Cristo Degli Abissi” statue, and no other dive would do.

When we got to the site conditions turned out to be fine, and the dive was on! We jumped in, and spent about forty minutes swimming around the coastline, ending up at the statue, which is in about ten metres of water.

It is quite breathtaking and beautiful, and it is very surreal to find it there in the depths, even when you know it is there.

I was very satisfied to see it at last. I first saw a picture of it in a diving magazine when I was a child, and thought, “One day I will go and see that!” Well, today was that day!

On the boat trip back I am sure I had a big smile on my face. 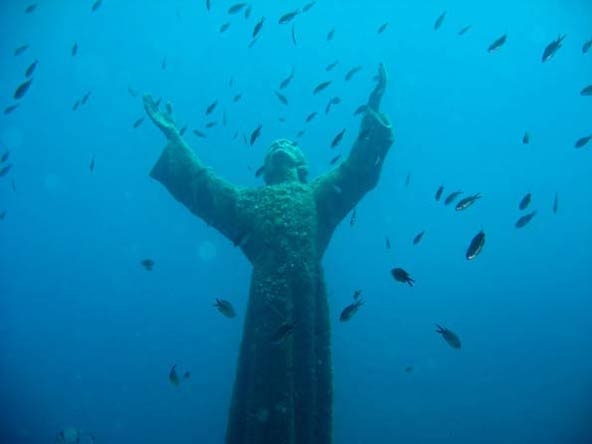 The dive company we went with were called DWS.
They were very laid back and friendly, and we reckoned that at 63 Euro, which included all gear, it was a pretty good deal.
Call Luca on +39 0185 282578 for further info.