We got up pretty early yesterday and drove up into the mountains to the north west of Nice for about an hour and a half. The journey became more and more spectacular the higher we climbed. We passed through beautiful little French villages, and stopped at a boulangerie for fresh bread and croisants for breakfast.

We finally arrived at the Gorges de Verdon, and the view into the deep valley was pretty daunting. We rounded a corner, and there was the bridge, le Pont de l’Artuby. It is an incredible place, with a worryingly deep gorge below the bridge.

Crowds were already gathering, and jumping was in progress. My stomach felt a bit queasy. Melanie was looking decidedly pale.

We queued and booked in, and found that we would have to wait about an hour and a half. We drank coffee at the little cafe at the end of the bridge with trembling hands, and waited our turn. It was a long hour and a half!

Finally our turn came around, and I was called to gear up. I was feeling pretty good by then, but as I filmed the guy before me jump, my hand was shaking. Finally I climbed the steps and stood on the edge of the bridge, having told myself not to hesitate when they counted “Un, Deux, Trois…”

I had bought a glove and cut a hole in the palm, and can just manage to squeeze my camera in it, so can use it as a small hand held video. Here is the jump as it happened:-

It was an incedible experience. In many ways it was a bit like a parachute jump, the sudden, smooth acceleration, and the increasing wind-noise as speed picks up, but visually very different. In a parachute jump you never see the ground that close, coming up to meet you so quickly – if you did, something would have gone horribly wrong!

By the time I returned to the bridge, Melanie was ready to go, and climbed up and jumped without hesitation too. Fantastic – well done!

98 goals to go! The next one planned is to dive to see the statue of Christ of the Deep near Genoa, in Italy.
Planned date: Sunday 17th August. 2008 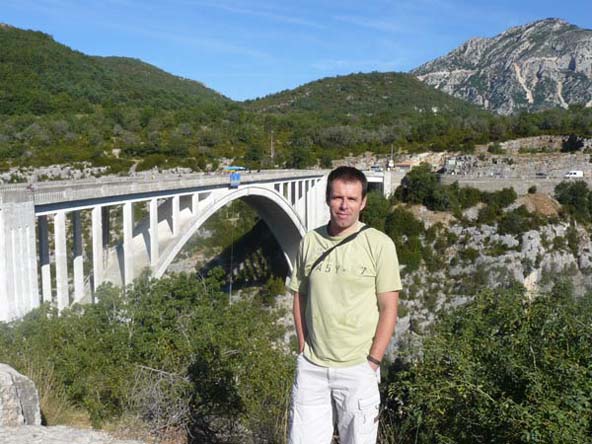 Congrats on the jump

Excellent! What a thrill! Glad you were able to record it! This is one on my list, too. 🙂

nICe…. i wanna try that too!