After finishing the “7 Peaks in 7 days” challenge I had a couple of spare days before meeting my friend Andrew, also from Australia and also travelling around the States at the moment. As I was due to pick him up at Denver airport, Val and Brenda suggested that I could stay with them an extra day or two and relax a bit.

Their friend Kris, who I had met at the BBQ before we went off climbing, offered to show me around a bit, and we had a great afternoon driving around with the top of her convertible Saab down, through the beautiful Garden of the Gods, and took a tour around the fantastically situated house, Glen Eyrie.

Kris has faced some significant challenges in her life, and does some motivational speaking, and I was keen to hear more of her inspirational story, and quiz her a bit on how she got started on the speaking circuit. What a great afternoon!

Kris dropped me off as Val finished work, and the next activity really caused me to wonder about the nature of relaxation here in Colorado. Val had suggested trying out The Incline, where locals go for a bit of exercise, and I thought it sounded like a good idea!

The incline is an incredibly long and incredibly steep climb up the remains of an old cog railway. All that is left now are the wooden sleepers (or ties, as they are called here). Val’s target time was around 35 minutes, as he is a regular at this, and comes a couple of times a week. At the start of the climb we bumped into Laura, who had joined us on a couple of peaks over the previous week, and her training partner.

As soon as we started I found myself at the back of the group, with Buddy, Val’s dog, occasionally running back down to me to see how I was doing, and encourage me onward.

The climb was long and tough, and I was panting hard all the way, but pushed myself on. The false summit before the end is a bit of a heart-breaker, but I was very proud, despite being the slowest of our group, to achieve a respectable time of 43 minutes on my first attempt. I am certainly fitter than I was a week ago.

Unfortunately, Andrew’s plans had to change, and family circumstances meant he had to fly back to Australia at short notice, so I changed my plans a little too. Val was planning a surprise party for Brenda the next day, and suggested that I should stay for that.

He also mentioned that it was Labor Day Weekend, and the Colorado Balloon Classic was on in the local park.

We were up early the next morning, and taking me to see the hot air balloons gave Val the perfect excuse to get Brenda out of the house for a while, so her family members could get into the house and prepare their surprise.

Weather prevented the balloons from taking off, but the sight of them all inflated ready to go was quite spectacular.

Brenda’s reaction was fantastic when she discovered her family from all over the country in her front room. Val had done a great job of getting everyone organised, and Brenda had had no idea that something was going on.

In the evening more friends arrived, and I enjoyed catching up again with many of the people who had joined us on one or more of the peaks. Val and Brenda’s nephew Matt was also celebrating his birthday, and was keen to go skydiving, and before long, Val, Eric and his wife Jackie had also decided they would go and jump the next day. I rang the dropzone, and confirmed that I would be able to hire gear there and jump too, and we had an enthusiastic group organised.

This morning we were off fairly early, and at the Canon City dropzone, once my paperwork was checked, and everyone trained for their jumps, we were into the plane and off. I had to sit by the open door, which was slightly nerve-wracking, and my first jump was from 4,000 feet. Also on board were Matt and Val, and their tandem masters. At my exit height I had no room to do anything but roll out the door, and after about 8 seconds of freefall I pulled my chute, and enjoyed the flight down.

On the ground I was given a second parachute, and along with Jackie and Eric, headed back to the plane, meeting the first jumpers as they landed. Matt’s face was a picture of excitement, and he had obviously thoroughly enjoyed his first jump.

Back in the plane, now with a lighter load of fuel, I could go to maximum height with Eric and Jackie, and had brought along my small camera that fits in a glove on my left hand. The video from it is okay, but as my left hand also had the altimeter in it, and is used to steer the canopy too, some of the video is a bit shaky.

It was fantastic to get back in the air again, and also good to be a little more current, as I have a few skydive goals to attend to soon. The last jump I did was back at Easter in Perth.

Well done to Matt, Val, Eric and Jackie. What a fantastic day, and all organised at the last minute at a party the night before. That’s relaxation Colorado-style! 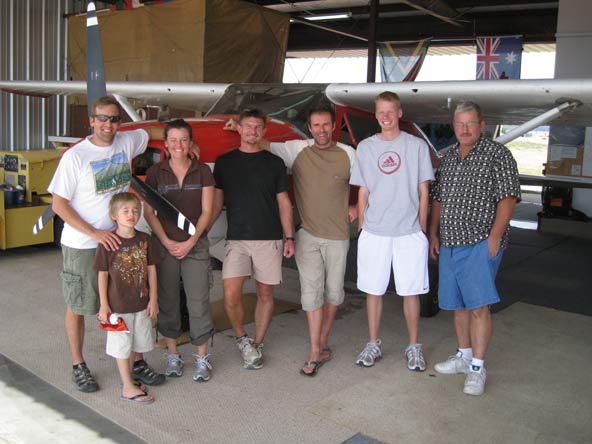 We were back at Val’s for lunch, and after finishing this blog it is time to hit the road again. I plan to take my time heading to Las Vegas, as there is a lot to see between here and there.

I will be sad to leave here, as I have had such a fantastic time. Colorado is such a beautiful place, and I am sure I will be back again one day. My thanks to Val and Brenda for being such wonderful hosts, and my thanks too to all their friends and family who have welcomed me to their group with open arms. What a a brilliant couple of weeks.