I set off late afternoon from Colorado Springs and drove westward for a few hours, across the spectacular I-70, which at one point climbs to over 11,000′. The RV did well, and all was going to plan as I pulled up at my intended destination at Hanging Lake Rest Area in the stunning Glenwood Canyon. But as I turned the engine off, a worrying boiling sound issued from under the hood. I decided to leave it until the next day to investigate.

I got up early in the morning, and only one other vehicle had arrived at the rest area, so I would be one of the first on the Hanging Lake Trail. This was one of the places Val had planned to stop on our “7 Peaks” week, but time had been against us that particular day.

It took about 45 minutes to climb up to the lake hidden high in the valley. I think my legs are pretty-well trained now for this sort of stuff, as the sign suggested it would take about an hour, and I felt I was going pretty slow!

The water was crystal clear, and the waterfalls beautiful.

Just above the lake Spouting Rock proved to be exactly as described, and a spectacular waterfall issues out of the middle of a cliff face! 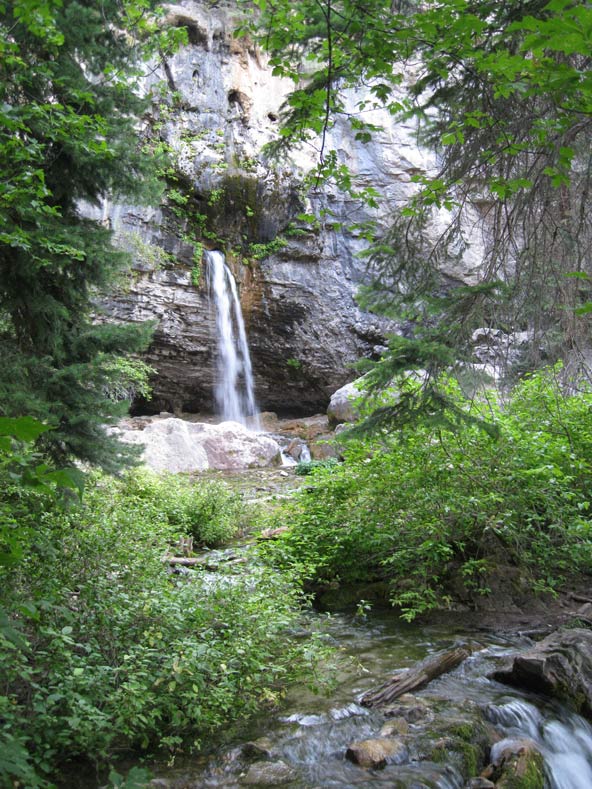 The view back down the gorge was spectacular too. I headed back down to the RV just as the carpark was starting to fill. I spent the next hour or so laid under the RV, fiddling with the fan belts. It had thrown the belt that runs the alternator and waterpump, and I used some thin rope I had to try to rig something up to get me into town, about 8 miles away.

My string system got me 4 miles or so before the makeshift belt snapped, and the rising temperature of the engine forced me to stop at the side of the interstate. Another hour later, when it cooled down again I refilled the water and managed to make it to town. Labor Day holiday is not the best time to breakdown, but I managed to find the one mechanic in town who was still working, and by mid-afternoon I was back on the road, all fixed up.

I arrived in Grand Junction, my intended destination by 5pm, which was pretty good, considering the day I had had, and made my way to Eric, Jackie and Dylan’s house – my recent climbing and skydiving buddies.

I was ready for a relaxed evening, and an introduction to the strategic game of “Settlers of Catan” was the perfect answer.

Obscure Australian movie reference which prompts the title of this posting:-
Picnic at Hanging Rock