The last few days have been pretty easy-going. I have been hanging out with Evan and Andrew at Evan’s beach pad at Hollywood Beach in Oxnard. Evan has had a lot of work to do, and can be seen suffering through a tough day at the office below. He still manages to find time to enjoy a beer on the beach at sunset most evenings though.

We managed to fit a couple of games of ten pin bowling the other night, and met up with Wade and his girlfriend Michelle. I had played against Wade when I was here last year, and scored my best game ever. Wade was looking forward to our return match, and sure enough, this time around he beat me, but it was a very close and exciting match. 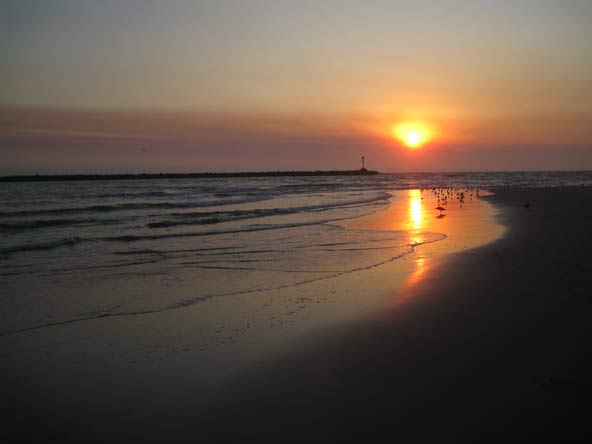 The next day I dropped Andrew off at the railway station, as he headed for Burbank airport, and then on to Las Vegas on his journey eastwards. That evening Evan and I wandered along to the local bar, a wonderful little place right on the sand at the end of the peninsula, where we played pool and darts.

I have been wandering the beach most mornings trying to maintain a bit of my new-found fitness from my Colorado climbing adventure, and have been swimming a couple of times in the surf. The weather is really nice here at the moment.

I have also been trying to secure a position as an extra in a Hollywood movie, but this is proving to be a little trickier than I imagined, as I do not have any sort of work visa for the USA. I see that as a minor technicality, and am hoping that I will be able to work on a voluntary, unpaid basis. Unfortunately, the extras casting agencies seem to see this as a bit more of a hurdle than I do!!

Today’s entertainment was awesome! Earlier in the week I found out that the Red Bull Soapbox Race was due to be held in LA city centre, and after seeing some of the photos, decided that this was a must-see event.

Evan and I headed into the city in the morning. The traffic was a bit slow on the way in, and it became obvious that we wouldn’t quite make it in time to have a look around the pits before racing began at 1pm. We found a parking garage close by and got to the main corner of the course just as the first soapbox headed down the track.

The street was packed, and we tried to find a good vantage point, but all seemed to be taken already. We watched from a tall cafe garden for a while, and then made our way up to the start of the course, where we found a pretty good view of the start line, just below a huge monitor where we could watch the whole run on the screen.

The course, marked out by hay bales down a pretty steep hill twisted and turned a bit, taking the crazy vehicles over a small jump before reaching the sharp left turn, where a huge berm was set up, and the carts could angle up the steep bank to take the corner. From there another couple of turns and jumps took them to the finish line.

There were some spectacular crashes as competitors didn’t manage to negotiate the corner, or when a wheel fell off after a jump. Some of the elaborate constructions did not seem to have the required robustness to finish the course.

The event was very well organised, the atmosphere was fantastic, and the racing spectacular. It reminded me quite a bit of the fun atmosphere at the jump off the pier at the Worthing Birdman Competition last month. 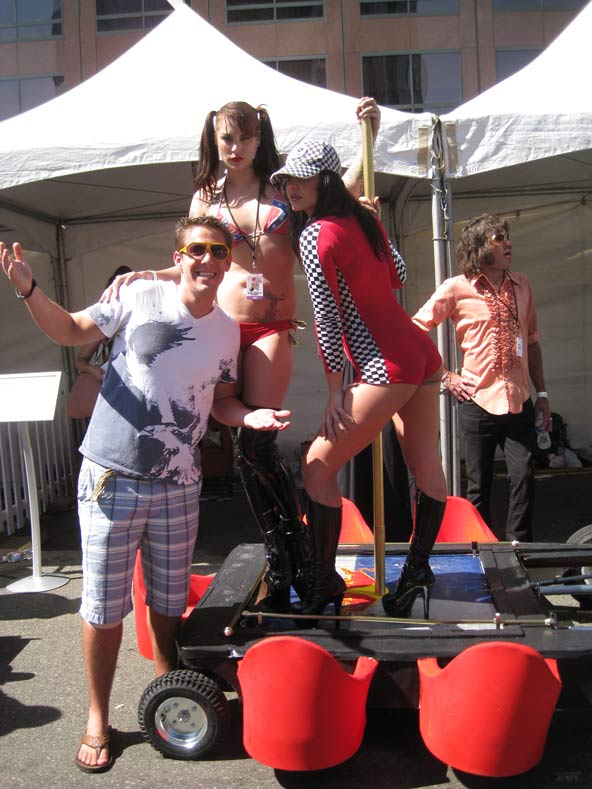