I set off from London late on Friday evening, when Martin and Rachel dropped me off at Euston Station. The train trip up to Birmingham didn’t take long, but the night on a couch in the darkened Burger King at Birmingham International Airport seemed a lot longer! It wasn’t too uncomfortable, but it was difficult to sleep with the noise of the cleaners, and later, the early passengers arriving.

At 5am I went to check in, and a few hours later I was back in France again, in the lovely south west coastal town of Biarritz. I had most of the day to potter around the coast, which was very spectacular, and despite some early rain, really liked it there.

At 6pm I caught the bus direct from there down into Spain, and arrived in Pamplona at around 9pm. Michael, from San Fermin Travel Central met me at the bus station, along with Mike from San Diego, one of Michaels’s clients.

I quickly dropped my bag off at Mike’s apartment, and we had a bit of wander around the town, and past the bull ring, where we met Michael’s wife Sofia. The meal they took me for was delicious, and I tried my best to be good company, but by midnight I was struggling. I had been on the go for over 24 hours, and from what I saw as I wandered back to the apartment with Mike, it’s going to be a tiring few days here. The streets were packed with revellers, and it’s still a couple of days until the festival begins. “This is nothing!” Michael told us, “wait ’til it really kicks off on the 6th!”

The next morning Mike and I went to visit Michael’s apartment, which overlooks the main, long, straight section of the bull run. After the opening ceremony on the 6th, I am going to a balcony party on the morning of the 7th to watch the first running of the bulls. What a fantastic view it will be. Thanks for the kind invite Michael!

I am in two minds about this. I think it will be good to watch, and get some hints and tips. However, when I went to the cheese rolling a few weeks ago, if I hadn’t run in the first race, and had seen the carnage of race 2 before I was due to run, I am pretty sure I would have had some second thoughts. I hope this isn’t the case with the running of the bulls. 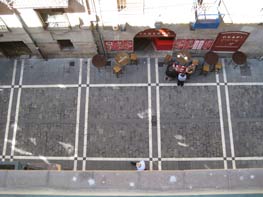 I have also been very lucky to get a ticket for the first night of the bull fights at the ring after the opening ceremony. Apparently these tickets are very hard to get hold of, but last night we met a lady trying to sell one ticket, as her huisband was ill and wouldn’t be able to go.

This is something else I am in two minds about too. My expectations are that I am going to be a bit horrified and saddened, but I also feel that to be able to talk knowledgably on any subject, you have to have experienced it to some degree. More to follow, I imagine…. 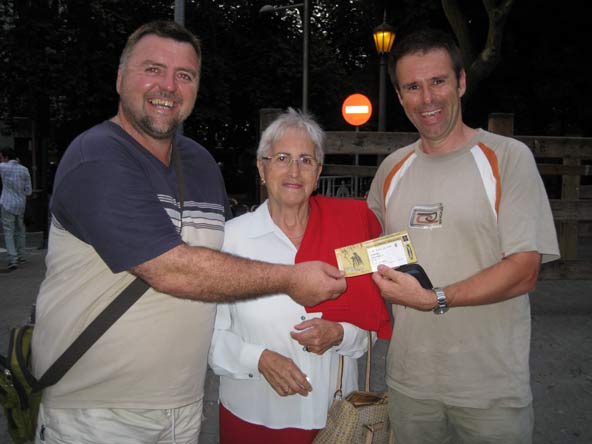