1.35pm. 6th July 2009. I’ve just got back to the apartment in downtown Pamplona that I am now sharing with six Americans. Last night Mike went to collect his friends from the airport, and after quick showers all round we hit the town for a few hours, then back to the apartment for a bit of a break.

At around midnight the rest of the apartment decided it was time to go back out again, as it only felt like 3pm to them, as they had just flown in from San Diego. I wisely declined the offer to join them again, as it felt like 3 in the morning to me, and they eventually returned at around 4.30am!

However, quite impressively, they all managed to be up early the next morning, and all dressed in the obligatory white and red San Fermin outfits, we headed down to the Town Hall square at around 9.30am.

The festival started today at midday, but locals had suggested we should be in the square before 10am, as it got pretty full and crazy after that.

The Tomatina Festival had prepared me well, as things were pretty wild by 10.30, and just got crazier as midday approached. The square was packed, but the atmosphere was very friendly and festive. The air was filled with champagne and sangria, and before long our white shirts were tinged completely pink.

At midday rockets were fired, and confetti filed the air, and the whole square erupted. It was awesome to see, and to be part of. A couple of us managed to climb up onto a balcony just after midday, and the pictures and video (which will follow as soon as I get a chance to edit something) only manage to capture part of the madness.

What a start to San Fermin!! And there are still bull fights and bull running to go yet!! 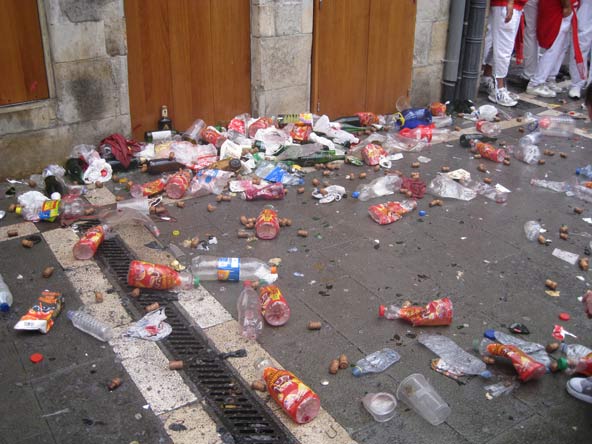