I have become slightly obsessed over the past couple of days with the huge denomination, but totally worthless, Zimbabwean Dollar notes.

There are many different sets from different years, but the most recent, which went out of circulation last year, are the nicest looking, and easiest to collect. It is also the best, because there are note in millions, billions and even trillions of dollars!

So I had a couple of notes from my initial disastrous financial transaction in Bulawayo, (Ah, but who really won, him or me? He may have got US$20 from me, but I ended up with Zim $60,000,000,000 (60 billion) and a brief new hobby!) I had also gathered a few more random notes in Victoria Falls.

It was only when I moved across the bridge into Zambia, and took a closer look at the small collection I had gathered, that I thought it might be nice to collect a full set, and maybe one day frame it, if I ever have a wall to hang it on. My favourite is the amazing 100 trillion note – $100,000,000,000,000. I was told that just before they withdrew the nose-diving currency, you needed four of these notes just to buy a loaf of bread!

So I made a list, and back on the bridge, and among the groups of taxi drivers, and the touts in town I gathered some of the notes I was missing. But there were still gaps. Some people would tell me that those notes had never been printed, but then the next group would produce one of those notes! I took everything I was told with a pinch of salt.

One guy on the bridge took a copy of my list of missing notes list, and promised me that the next morning he would have some of them. The one I really wanted was the 20 Trillion Dollar note. I knew it existed, everyone agreed, but all said it was very hard to get hold of, and quite rare.

On my return to the bridge this morning my contact had not arrived, and his mates laughed, suggesting that he dared not show up, as he had failed to find any of the notes I wanted, after his confident promises of the previous afternoon.

Another guy, Emanuel, who I had met a couple of times before, produced two more notes that I didn’t have, and offered to help me find the elusive 20 Trillion, and reckoned he knew many people in town who might have one.

So we took a taxi back to town, and trawled the craft market stalls. Emanuel certainly knew a lot of people there, but we couldn’t find the rare note! Eventually I had to call it a day and head back to the hostel to grab my bags, and head the airport.

I thanked Emanuel for all of his help, and happily gave him a big tip. It had been a lot of fun scouring the town with him. I have really enjoyed my couple of days in Livingstone. It is a wonderfully friendly place, and the people are quick to smile and laugh, and are very welcoming to strangers. I think I got to be fairly well known as the eccentric note collector guy, and would often be asked by someone, “Hey Aussie, have you got your 20 Trillion yet?” 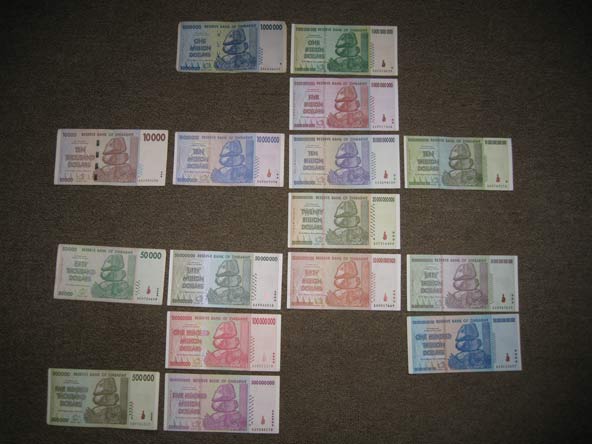 On the flight down to Johannesburg I met a fascinating guy, Bjarte, who has a very interesting family background, half Zambian, half Norwegian, with a bit of Canadian in there too. He was heading back to Norway after spending several months working on the family’s retirement house in the Zambian bushland. We got onto the subject of films and TV series, and found that we had very similar tastes, both amazed that we knew of the same obscure actors and TV series. The flight passed very quickly and pleasantly.

At the airport, I decided to try one of the backpacker hostels nearby, and gave them a ring as I waited for my bag to come off the carousel. Rob and his family and staff at Shoestrings Airport Lodge were wonderfully helpful, picked me up from the airport, and dropped me off again at 5am the next morning to check in for my flight to South America. Alot better than a night on the airport floor! Rob later told me, “Jo’burg isn’t the safest airport to sleep in!” I think I made a wise choice, and got a good safe night’s sleep instead. 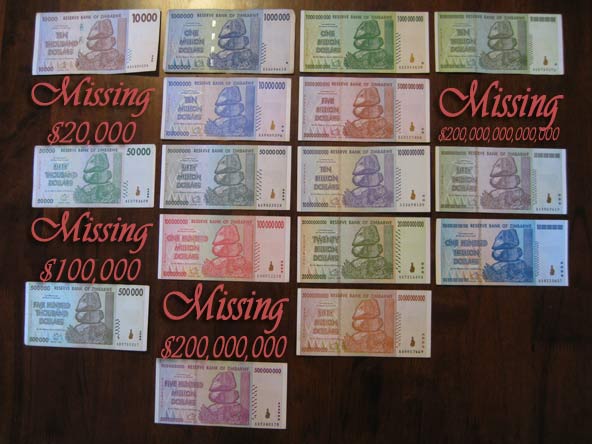 This reminds me of when I used to collect stamps and I had some 1 million mark (and up) stamps from post-war Germany. Quite bizarre that this kind of currency is ever issued, much less used!