For the past month or so I have been staying on the west coast of California, mainly living by the beach at my friend Evan’s place. It has been pretty easy, as I rented a car for a couple of weeks, had my GPS, and could happily get around to wherever I wanted, the only real limitations being LA’s ludicrous traffic!

However, my US time is just about over, and I feel that I am really travelling again, and today have really enjoyed that feeling of being somewhere completely unfamiliar.

The city of Oaxaca is a fascinating place, and it has been a real sensory treat to be in such a vibrant and unusual place. You can feel the excitement in the air as the two big days of the Dia de Muertos approach, and people are making preparations everywhere you look. Flowers are being sold on many street corners, as well as all sorts of candy skulls and skeletons as offerings for relatives who have passed on.

But it is the other differences that have stood out for me today, the sights that just make you stop and smile, or at times make you stop and look mystified. A shop selling a wide array of coffins, policemen with machine guns, colorful houses and murals, a dog asleep in the dust beside the road, oblivious to the noise and chaos around, traffic lights at junctions that merely seem to be a suggestion as to what might be appropriate, the vibrant market where about 90% of the food on offer is a mystery. It’s such fun to be travelling again.

Today, following Rebecca’s suggestion I took a bus out of town to see Monte Alban, a World Heritage listed pre-Hispanic city that was occupied for 13 centuries, from around 500 BC to 800 AD. What a fantastic place, quite similar, I thought, to Chichen Itza, which I visited back in July, but without the huge central pyramid.

It was also very interesting, because you could climb up to the top of some of the temples, which gave a magnificent view over the whole site.

On my return to the city I wandered again through the market, and was offered fried (or roasted, I’m not sure) grasshopper, which was surprisingly tasty, so I bought a bag of them, and have been handing them around at the hostel. 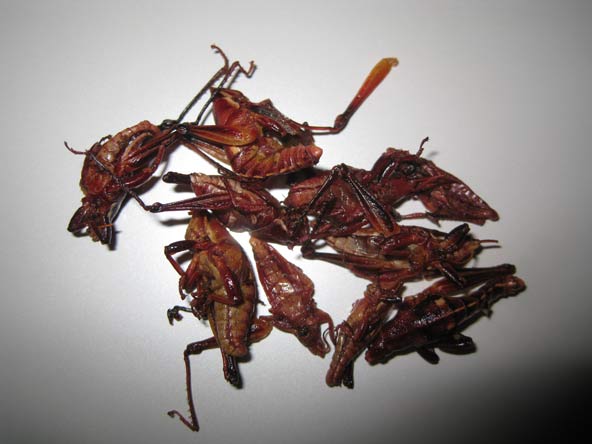 I am really looking forward to tomorrow now, and my first visit to one of the cemeteries.

Hoho! Quite different from the "Mexican food" I eat here in the States!

Haha. I was talking to a Mexican guy at the hostel last night, saying that I had become quite a fan of Mexican food, and had really enjoyed what I had had in the States. He just laughed. "That's not real Mexican! We call that Tex-Mex!" There are certainly many things for sale on the food stalls here that I have never seen before! Including the grasshoppers!!