I’ll not beat around the bush, I didn’t really like Madrid as much the other two Spanish cities I had visited earlier in the week. After Barcelona’s majestic architecture, and Valencia’s interesting old city area, Madrid did not seem to have anything that any other big city does not have.

Paula met me at the station in Madrid beside the biggest baby’s head sculpture I have ever seen, and we compared notes on Valencia and the Tomatina.

We had two nights and one full day there. On the first evening we went out for a meal and a drink, and found two Irish pubs within a hundred metres of our hostel. It was pretty lively and the pavements were filled with tables and chairs. They certainly enjoy the nightlife in the city.

A day of sight-seeing uncovered a couple of spectacular buildings, the Palacio Real de Madrid (Royal Palace) being the most impressive, with very nice sculpted gardens.

But the highlight of the day was the Museo De Arte Reina Sofia, where there were many paintings by both Picasso and Dali. Those guys certainly saw things in a different way to most of us!

The whole city reminded me very much of London in many ways, and by the end of the day I was looking forward to heading to the UK next. One day in Madrid was enough.

The second night in the hostel only confirmed my desire to leave Madrid, when at 5am a group of Spanish residents returned to the hostel after a long night out, and proceeded to make the most incredible amount of noise for the next half hour. I don’t think I could have made that much noise even if I was trying too – incredibly inconsiderate. 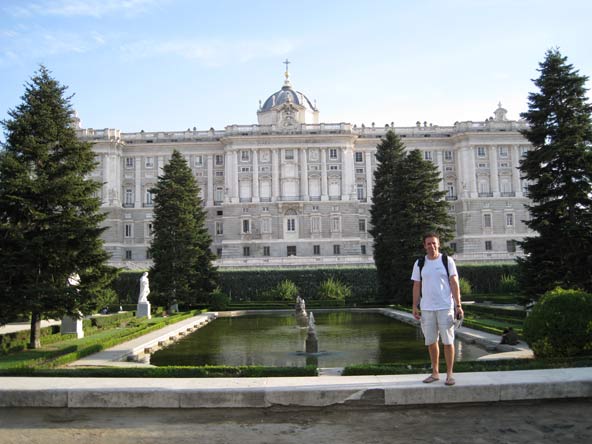