Linda and her husband Brian had a family function to go to today, so Steve and Gina would look after me for the day. Was there anything I particularly wanted to see? As I have no idea what New Jersey has to offer other than Sopranos locations, we had a look through their New Jersey Attractions book.

Something that did catch my eye was a place that was described in the book as one visitor’s highlight of their whole US tour, and apparently had also been compared in favourable terms by one Indian visitor to the Taj Mahal. How could I possibly miss Northlandz, New Jersey’s Taj Mahal of model railways?

In the guide book it is claimed to be the biggest model railway in the world, and when we went to take a look, my doubts were dispelled. It was absolutely HUGE, completely filling a warehouse-sized building with the most intricate modelling of towns and countryside, cities, mountains, and bridges. Trains of all types ran here and there.

I am not at all a model railway enthusiast, but this place was amazing. The guy that owned and ran the place told us that he had spent 26 years creating and expanding what really was his lifetime’s work. The attention to detail, and the huge scale of the whole thing was very impressive.

Famous visitors who had signed a big whiteboard at the entrance included Rod Stewart, and Neil Young.

Later we met up back at Linda and Brian’s house. Brian had to work night shift, so Linda and I went out with Steve and Gina for dinner. We drove out to Bloomfield where we visited Holsten’s Ice Cream Parlour. I was pretty keen to see the place, as it is where the very last scenes of The final episode of The Sopranos was filmed. (IF you haven’t guessed by now, I am a bit of a Sopranos fan!)

The place looks a little different to when the scenes were filmed, but the booth where the family sit (and die?) was marked with a sign, and of course I had to have a picture taken sat there. What a fitting last supper location for my visit to New Jersey.

I set off on my travels again tomorrow, and am catching the Greyhound bus up to Toronto in Canada. Once again, a big thank you to Linda for being such a great New Jersey guide, to her husband Brian, and to Steve and Gina, who were all so wonderful to me. 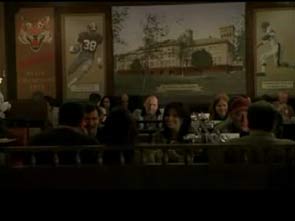 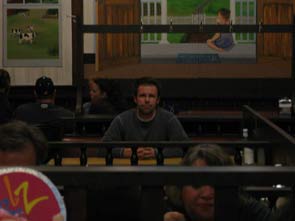 Spoiler Alert: The video below is of the final scenes from The Sopranos’ final episode. Don’t watch if you don’t know or don’t want to know the ending.