Stephanie emailed me a week or so ago about meeting in New York to come along when I went to see the Statue of Liberty. She is, or was, a New York local, she now lives in Conneticut, and she gave me a few tips on other things I might like to do while in New York. One of her suggestions was to walk across the Brooklyn Bridge.

So Lilly and I and the three kids were up early and headed into the city on the Long Island Rail Road. We took the subway downtown and under the East River, getting off at High Street in Brooklyn. The walk across the bridge was another experience that had that familiar feel to it, almost as if I had been here before. It was a beautiful autumn day, and we strolled across with the other tourists, with plenty of time on our hands.

The statue is huge, very impressive indeed, and all the more amazing when you look at pictures of the construction, transport and completion of the giant project in October 1886. The view of Manhattan from the pedestal is fantastic, it’s a real shame that it is no longer possible to go up to the crown itself.

Eventually Leo, Lilly and family headed off home, and after a quick walk around the base of the statue, Stephanie and I headed back into Manhattan. After something to eat we went to the WTC Tribute Memorial, which was very moving. We were both very quiet for a while afterwards.

Next stop was the Empire State Building, and we arrived at the observation deck just after dark. It was breathtaking to see the city spread out far below, lit up just like in the movies!!

Finally Stephanie suggested seeing the Rockefeller Centre, where the often-featured-in-movies ice skating rink is. It is great having a local guide.

Stephanie headed off for Grand Central Station, and her train home, and on the way back to Penn Station I detoured through Times Square, which looked wonderful at night.

Another brilliant day. I love New York. Thanks again to Lilly and her family for looking after me while here, and to Stephanie for coming so far to be my local guide for the day. Seven of us went to see the Statue of Liberty together, which is the biggest gathering so far for one of my goals – thank you all for joining in. 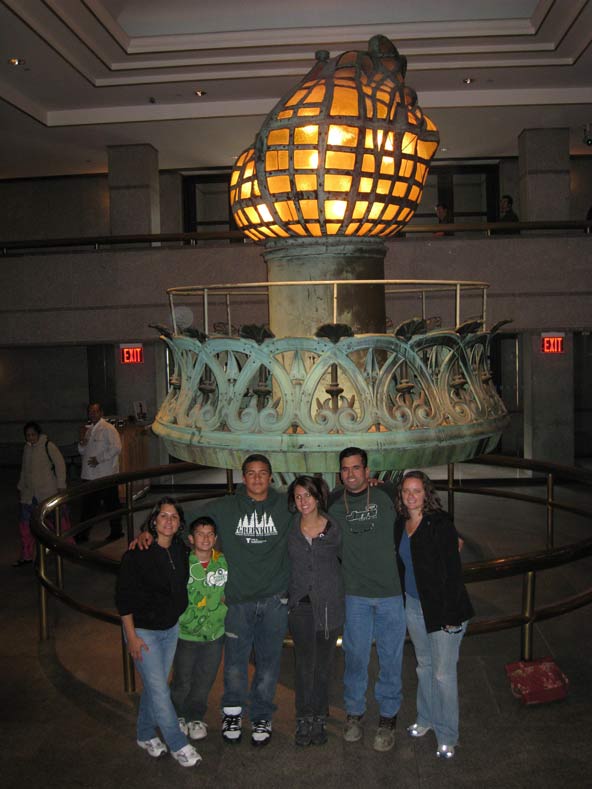 Glad to see you’re here in the good ol’ USA. I’ve been following along, but now I’m off for my own adventure, to Costa Rica. So ironic that I will be out of the country at the very time when I would be most likely to be able to join for one of your gatherings… I will catch up when I return on the 20th. In the mean time, I hope you see many of the great sites of our country! Have fun and happy journeys!