Is there a doctor in the pub?

Chicago has been such a fun place, and I have had a great week here. I seem to have managed to fit so much in, and that is largely thanks to the wonderful city guides I have had here.

On Friday I did the touristy thing, and went up to the observation deck at the Sears Tower, and later met up with Aileen and her friends Ted and Olivia, and went to see a fantastic group, The Secret Machines at the Metro. They were pretty psychedelic, perhaps a mix of Pink Floyd and Rush, with a pretty big powerful sound.

They have played before as support to Oasis, and are doing so again on Oasis’s upcoming tour of Mexico.

Yesterday was one of the highlights of my Chicago visit. Diane took me along to the 28th Annual Tavern Tour, which is a huge fancy-dress pub crawl that takes place on the last Saturday of October each year. There were probably around 300 to 400 people, maybe more, all in costume, wandering from pub to pub in central Chicago. It was absolutely hilarious, and some of the costumes were very elaborate.

Diane took me to a costume shop, where I got a doctor’s outfit, and a bit of fake blood, and I geared up as an ER doctor.

In the first pub I set myself a challenge of getting a photograph of myself with at least three different naughty nurses. It turned out to be harder than I thought, and ultimately, I failed, only finding two nurses. However, I did find 8 other doctors, a Muppets lab technician, and a psychiatric patient. 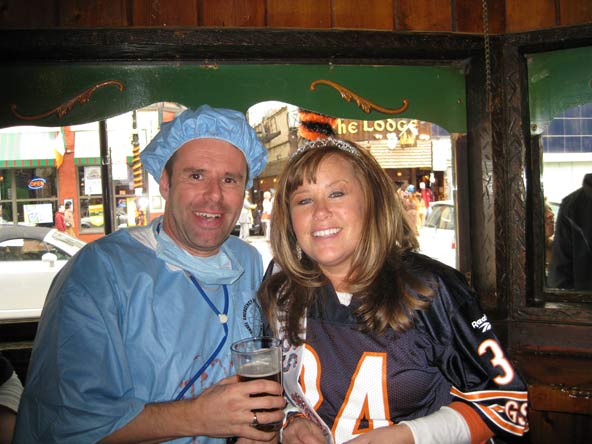 Once again, huge thanks to Diane, who has been so kind to put up with me living in her front room for the week, and to Aileen for being a wonderful city guide, and also to everyone else I have met in Chicago who have made this such a great week.