After a long day the previous day, and a bit of a re-think in the evening, we decided to put the extra day we had created to good use. Rather than attempting the steep Gokyo Ri climb, which involved a 5.30am start, Henry suggested an easier trek further up the Gokyo Valley, to the fourth and fifth lakes, where the guidebook suggested that there were some impressive views of Everest.

I didn’t sleep too well overnight, and woke in the morning with a headache, and feeling a bit of the familiar altitude sickness. I had an altitude tablet, and a couple of headache pills, and felt a bit better after breakfast.

It had snowed overnight, and the walk up the valley was beautiful. We walked at over 16,000 feet for a couple of hours and the views at the end were well worth it.

We we took many photos of Everest rising magnificently in the distance. In this panorama of three pictures below, Everest is in the picture on the right, haloed by cloud, second peak from the right-hand edge.

On the way back down though, fatigue kicked in, and I started feeling pretty rough. It was a long, tiring slog back to Gokyo, and by the time we reached our accomodation we had spent around 5 hours at over 16,000 feet. After a bowl of soup I fell asleep for a couple of hours in the afternoon. I was pretty certain that I would be fine the next day, and just had the last bit of acclimatisation to do, as well as needing a good night’s rest.

I felt much better by dinnertime, and ate well, followed by a lively game of cards with our guides. I still got a pretty early night as we planned to be up at 5am in the morning for the challenging climb up Gokyo Ri. 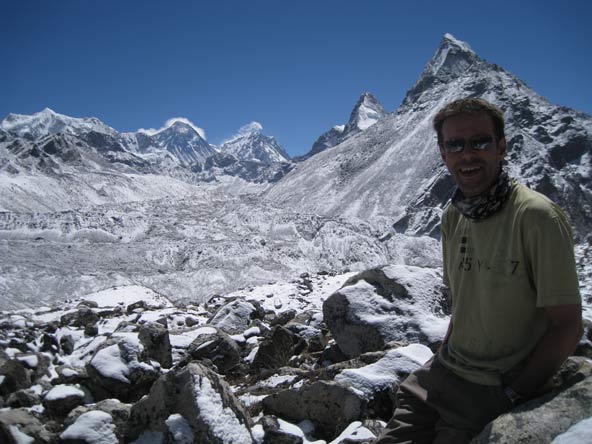 Once again it snowed overnight, but dawned crystal clear in the morning. We were up at 5am, and on the path by 5.30. The start of the climb up Gokyo Ri was only a few minutes from the door of our accomodation, and before long we were labouring up a two-hour long trudge to the top of the steep hill. I always find it easier to go very slow and steady, and not stop at all, and our group of four made good progress.

We passed a couple of others who had started before us, and about two-thirds of the way up I was feeling great. I had slept well, had no sign of altitude problems, and was feeling strong again. I maintained my steady pace, and was surprised to be the first of our group to the top – very much different to the previous day, when I had been the one struggling badly.

The view was incredible! Far below you could see Gokyo on the edge of the third lake, with the huge Ngozumpa Glacier running just behind the tiny settlement. Beyond that mountains towered, and in the background Everest itself was highlighted in a halo of cloud.

The summit of Gokyo Ri was strung with Buddhist prayer flags, and there was hardly a breath of wind. It really was a magnificent location, and well worth the two hours of effort to get there.

The journey down only took an hour or so, and back at the tea-house Henry and I prepared to do something that our guides were convinced we had only been joking about.

In our swimming shorts, towels slung over our shoulders, we headed down to the lake, and in the only way I imagine it is possible to do, we plunged in. It was shockingly cold, but I swam out a little before returning to shore. Henry was already back out, but to my amazement dived in for a second dip. Hot coffee and a big breakfast slowly warmed us afterwards. The locals were amazed – I don’t think they had ever seen anything like it!!

Once warmed and fed, we packed our bags, and set off on what was supposed to be the next day’s itinerary, trekking out the back of Gokyo and onto the glacier itself. This was quite surreal, as it is mainly rock-covered, but every now-and-then you can see walls of ice and frozen pools. All around there are rocks rolling, and sounds of movement. Quite incredible.

Two hours took us across the glacier, and to the tiny collection of buildings at Thagnak, where we settled in for the remainder of the afternoon. Despite fitting in the extra day’s side trip to Gokyo Lakes, we are still a day ahead of schedule!

I washed some clothes in a little stream nearby, surrounded by five or six completely uninterested yak. The sun was still out, and I was looking forward to fresh socks for the next day’s challenging trek over the Cho La Pass.

Another 5am start meant we were on the trail by 6am, on what was going to be one of the tougher days for me again. It was a long slow haul up the climb towards the pass leading over to the Khumbu Valley, but we seemed to do well, and passed a few groups on the way that had started before us. It took about three hours to reach the pass itself, and the view was well worth the effort. A huge wall of snow lead upwards to a peak on our right, and ahead was a magnificent ice fall.

We had a bit to eat in the sun, and then headed down over ice fields, and then rocky paths, arriving at Dhzonglha another two hours later. Accomodation there was limited, but we would be able to get a room, Deepak told us. Henry, however, was keen to push on, and in spirit I agreed, but my body would have been quite happy to settle there for the rest of the afternoon.

However, push on we did, finally making it to Labouche by mid-afternoon. I found the last part of the day a real slog, and was glad to finally arrive and take a much needed break. The tea-house at Labouche was fairly basic, and Henry and I had to take turns in the tiny room to organise our gear.

Once again we had completed two days planned trekking in one day, and were now two days ahead of schedule.

An early dinner, a few games of cards and an early night were the order of the day, as once again we faced an early start in the morning, and a big day ahead.