Breakfast was delayed slightly, so we didn’t get away until 6.30am, and arrived at Gorak Shep a couple of hours later. This really is the last settlement before Base Camp, and I have read about this place in so many mountaineering books. There was an air of unreality about finally reaching this place. On the walk I thought of all the famous footsteps that I was following. Mallory and Irvine came this way, as did Hillary and Tensing, and hundreds of other climbing greats since then.

We left as much gear as we could at the Snowland Highest Inn, which would be our accomodation for the night, at almost 17,000 feet. With much lighter packs for the rest of the day we set off for our ultimate goal, Everest Base Camp.

It took less than two hours to reach, and I was feeling much fitter and healthier than the previous day. Unfortunately it was Henry’s turn to be feeling a bit under-the-weather, and Surya and I waited by the Base Camp overlook area for Henry and Deepak to arrive.

I was really keen to go down into the camp itself, and see the awesome Khumbu Icefall from it’s base. Henry elected to stay on the “city limits” with Deepak, and Surya and I headed down into camp. The atmosphere was wonderful. There was a group of singing and dancing sherpas, a photo exhibition in one tent, and all sorts of preparations going on.

I soaked up as much atmosphere as I could, and took many pictures of the stunning icefall. It all looks very imposing, and people up there just looked like tiny dots.

Eventually we headed back to collect Henry and Deepak, and began the journey back to Gorak Shep. 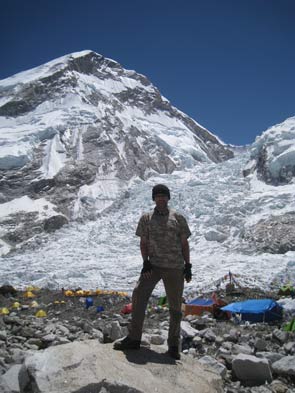 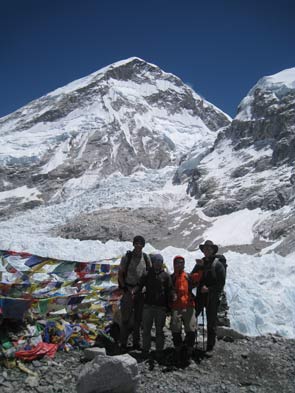 We had wondered about the possibility of climbing Kala Pathar, which offers some incredible views of the whole valley, but Henry wasn’t feeling up to it. I was still feeling good, and decided I would tackle the climb, which ascends to well over 18,000 feet. Surya kindly volunteered to come along with me.

It was a real slog, as we had already had a long six-hour day, but we climbed steadily and slowly. By the last third of the climb I was starting to fade a little, and was disappointed that the clouds were building fast. We really needed to be up there a couple of hours earlier. It got colder towards the summit, and I put on all the clothes I had with me as we finally reached the wind-swept peak.

The view was clouded over, but we could see one gap in the clouds about to pass over, and with a few others at the summit, waited for five minutes, and were rewarded with a brief, stunning view of Everest. 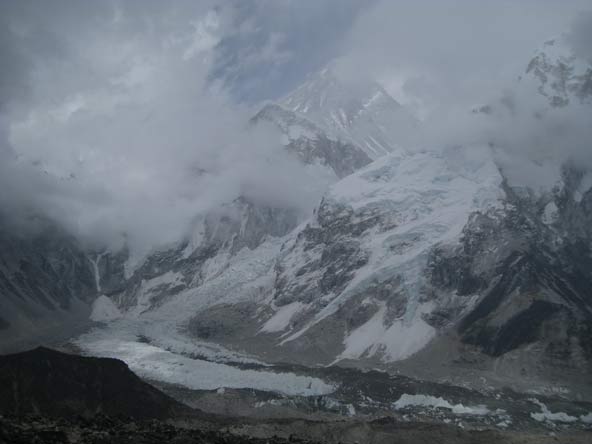 We headed down quickly, arriving back at Gorak Shep at around 3pm, after a nine-hour day, just as the snow began to fall. Luke warm coffee never tasted so good!

This has been an absolutely incredible goal to achieve, and has probably been one of the most physically demanding things I have ever done. In terms of sustained effort it even beats the “7 Peaks in 7 Days” challenge in August last year. (Sorry Val!)

I am incredibly proud of what I have achieved, and although I appreciate that thousands of other trekkers achieve the same thing each year, I am pretty sure they are all very proud too.

My thanks for assistance on this goal go to Kim, who introduced me to Niraj at Himalayan Encounters, to Niraj himself for helping me to arrange everything, to Henry for being a wonderful fellow trekker, and of course, our fantastic guides, Deepak and Surya, and our amazing porter, Sudip.