LA just keeps offering one amazing day after the next. Thanksgiving Day was absolutely brilliant!

I added this goal to my list, and recently, as I approached Los Angeles, I was contacted by Mark Bakalor, who lives and works with a juggler called Vova Galchenko. Vova, Mark told me, is one of the world’s greatest jugglers. He was recently featured in The New York Times and has been on The Oprah Winfrey Show, BBC, ESPN, Ellen DeGeneres Show, The Today Show and US news program Nightline.

Mark invited me to their family home for Thanksgiving Day, and gave me the address to put into my GPS. Driving out there was an experience in itself, as “Maggie” directed me out into the beautiful Santa Monica mountains above Malibu. As I approached, and the GPS said I was there, I looked up at the hillside at the most amazing house perched high above. That can’t be it, I thought – it was! The place was stunning.

I met Mark and Vova, and the whole family covering four generations, all gathered for Thanksgiving dinner. I learned a bit of Vova’s background story. He had left Russia at the age of fifteen alng with his sister Olga who was twelve at the time, and had come to America in search of a better life. They were already an incredible juggling partnership, and had performed many shows, but it was when Mark and Vova entered a competition to make a video for a Fat Boy Slim song that things really started happening.

The video was a huge hit on YouTube, and led to all sorts of TV appearances over the past couple of years. Have a look at the video:

And so here I was, in the house where the video was made, throwing clubs around with the guy that Time Magazine called “one of the greatest jugglers in history”, and The Today Show called “the best in the entire world”!

After a wonderful Thanksgiving meal, we juggled some more, and the fire clubs came out, and the frustrating practice started. Vova, of course, made it look very easy, but in the dark, it is very hard not to concentrate on the flame, and seeing the handle of the club as it comes over the top is much harder.

However, with a lot of practice, and a bit of lighting from inside the house, I started to make a couple of catches. The general opinion of all the jugglers there, which included Vova, Mark, and his dad Barry, was that to be considered a successful “juggle” you had to perform an amount of catches which is double the number of items you are juggling, and an added bonus would be to catch the final item to “look cool”.

I tried many times, and found it a lot trickier than I had thought it would be. However, thanks to the patience of all there, I finally managed to do six or seven catches in a row. I kept at it, and eventually managed a run of six with a final catch at the end. As I caught the final club, I heard Vova saying, “Oh no, don’t catch it!” It was the only time he hadn’t been filming me, so I had to do it again!

Although I am happy that the goal has been achieved, there is still room for improvement (a lot of room for improvement when you see what Vova can do!) before I will be satisfied, so I do intend to keep practicing, and hope to do some more fire-club juggling in the future.

Huge thanks to Mark, Vova, Olga, Barry, Ari, and everyone else at the Bakalor home, what a truly outstanding, memorable day! 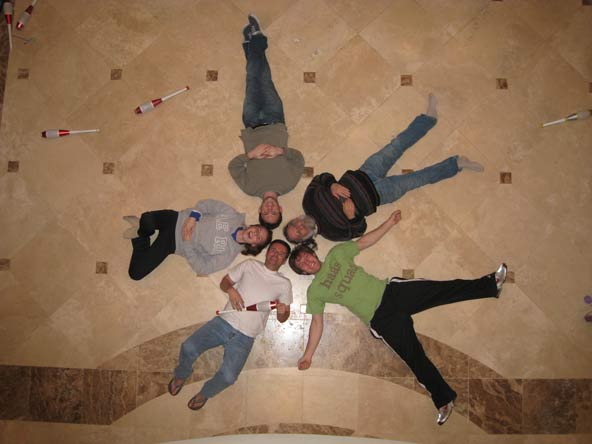 More information on Vova and Olga at the following links. The videos are well worth watching:-

Or for more incredible juggling, simply go to YouTube and type Vova into the search box to find any amount of amazing stuff.