Jelene woke us early this morning, as there were monkeys by the swimming pool, and before long the monkey-feeding debate was in full swing. In the brochure at the condo there is a big article on why people shouldn’t feed the monkeys.

I have been teasing Moe for some time now, as she is quite environmentally responsible most of the time, but I was beginning to suspect that the temptation to hand-feed monkeys would be too much for her.

And sure enough, she cracked, sitting on the poolside with a proferred handfull of banana. We laughed about her loss of environmental credibility, and she tried claiming that I was equally guilty, being present at the time. I likened myself to a war photographer, merely documenting the injustice and horror in order to be able to report it impartially.

(In the interests of fairness, Moe did point out the fact that my carbon footprint at the moment is more like a huge boot-stomp with all of the air miles I have racked up over the last two years – can’t really argue with that!!)

Monkey-feeding – right or wrong? You be the judge! Comments invited…

From the condo information book:-

You might find feeding the monkeys (and other wild animals) to be a thrilling experience, but you are not doing the monkeys a favor. In fact you are actually harming them. Here’s why:

1). Monkeys are highly susceptible to diseases from human hands. They can die from bacteria transferred off your hands that has no ill effect on you.
2). Migration to human-populated areas to be fed increases the risk of dog attacks and road accidents.
3). Irregular feeding leads to an aggressive behaviour towards humans and other species.
4). Contrary to the stereotype, bananas are not the preffered food of monkeys in the wild. Bananas, especially those containing pesticides, can be upsetting to the monkeys’ delicate digestive system and cause serious dental problems that can eventually lead to death.
5). Feeding creates a dangerous dependency on humans that diminishes the monkeys’ survival abilities.
6). Feeding interferes with the monkeys’ natural habits and upsets the balance of their lifestyle centred on eating wild fruits, seeds, small animals and insects.
7). Contact with humans facilitates poaching and the trade in illegal wildlife.
8). Pregnant females who are fed nothing but bananas during their pregnancy will not give birth to healthy infants. The babies will be malnourished, or never develop to term and die before birth.
9). Monkeys need to travel an average of 17 kilometres each day to be in good physical condition. If they know that food is available in a particular location, they will not leave that area.
10). Not only do we pass on diseases to animals when we feed them by hand, but they can pass diseases on to us as well. 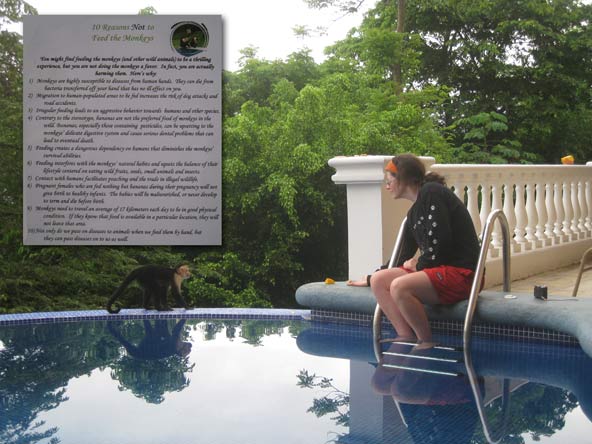 Comments invited, eh? lol
welllll…I would have to agree with the sign. Monkeys may be fun to watch, but I'd compare them to crows and pigeons looking for a free handout. At one of our fish and chip shops here dozens upon dozen of crows are now gathered because people throw them fries and other food for various reason. The more food is thrown, the more birds show up. And the birds learn this is where easy food is to be had. Not only are they a nuisance, but poop all over the deck, the tables and seats. I think this would also be true of monkeys and right by (or in) the pool, ugh. They are opportunists just like crows. That same monkey will keep returning just in case someone else will break down 'just this once'…

While that entire list of reasons is quite correct, your photo exposé reveals just what powerful sorts of influences she was up against. I fear it would take superhuman powers to resist those faces! Anyway, you can both atone for your green missteps (monkey feeding and air miles) once this particular journey is over. Or … not. 😀