It was supposed to be a full moon, but thick clouds had darkened the horizon, and looking out of the window of the little plane, everything appeared ominously black. There was a little light left on the horizon where the sun had set behind the mountains about forty minutes earlier.

It had been an eventful and tiring day at the dropzone, and most of the staff and customers had already had a few beers. By the time 9pm came around, I was the only skydiver that hadn’t been drinking, and along with Skip, the pilot, who had also remained sober, I was the only person on board the little Cessna.

Being the only jumper tonight was good, in that I didn’t need to worry about other canopies in the air at the same time as me. One of the biggest dangers of jumping at night is two jumpers not seeing each other, and getting wrapped up together. But the down side of being alone in the plane was that there is nobody else to share the ride to height, to laugh and chat with, and to dispel the nerves.

But with just Skip and myself on board the plane climbed to height very quickly, and as I fiddled with my camera and gave my gear a final check-over, I was surprised to hear Skip yell “Two minutes!” over his shoulder. I looked at my altimeter. 3,500 feet.

By the time we turned on to jump run, and Skip powered off, shouting at me to open the door and take a look, we were at 4,500 feet, and I would get almost 10 seconds of freefall. Looking out of the open door I could see the runway almost directly below, and could easily pick out the green lights of the landing marker, a huge T-shaped wind indicator in the centre of a large, flat, open area.

With a nod to Skip, happy with the spot, I climbed out onto the step, and hesitated for a second, trying to enjoy the moment, and the anticipation of what I was about to do. It really was dark out there. The only light I had was a small glow-stick attached to my chest strap, a faint glow from the luminous alti that I had borrowed, and a tiny red light on my helmet that told me my video camera was recording.

One second, and then I jumped into the darkness, accelerating downwards quickly, past the point of no return now. It is quite an extraordinary feeling to be falling in the dark. I watched the alti, and as it hit 3,500, and my audible warning went off in my helmet I reached behind me and threw the pilot chute.

I could just see the outline of my parachute as it started to open above me, and as far as I could tell all was looking good. I had a small head torch on my wrist and switched it on briefly to check that all was as it should be above me, pleased as ever to see a fully open canopy there. All I had to do now was get onto the ground without hurting myself.

I could clearly see my landing area marker, which showed wind direction too, and set up pretty well, making sure that I was going to land with the marker ahead of me to give me a decent height reference. I went a little too far downwind on the approach, and when I turned into wind for landing the marker was a little further away than I would have liked, but at least gave some indication of how far I still was above the ground.

As the very dimly visible ground came up to meet me, I flared the parachute at what looked like the right height, losing forward speed and lift, hoping to stall to a stop at ground level. But in the dark I had mis-judged slightly, and flared too high, stalling the parachuter while still three or four feet above the ground. As the parachute stopped, I knew I would drop quickly, and made the decision to roll when I hit the ground instead of trying to stay on my feet, which would have more potential to end in injury.

My roll was good, and I was laughing before I was even back on my feet. I gathered my gear, and was met by Val and the others from the dropzone, laughing at my dusty condition, but offering congratulations for a successful, and injury-free night jump.

I felt absolutely elated. I had been more nervous beforehand than I had cared to admit, and the landing area was darker than I had ever expected, but all had gone very well.

Thanks once again to Val for helping out, driving, and offering support and encouragement on yet another goal. Thanks also to Skip for being kind enough to run the plane for a single jumper. And also to everyone else at Skydive Colorado for being there to offer advice, encouragement, good-natured mockery and hearty congratulations. 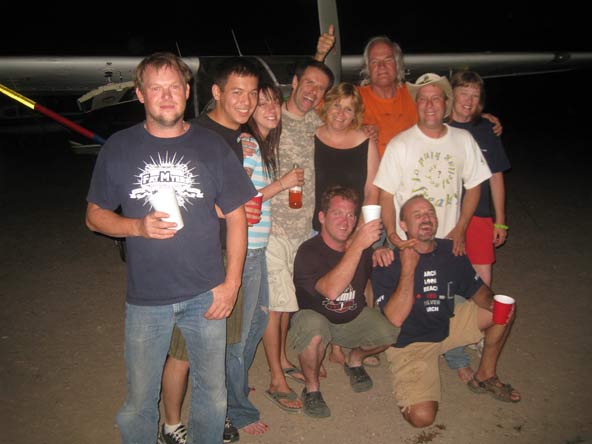 In this picture, from left to right:-
Allan, Chang, Emily, Me, Tammy, Skip, Brian, Darlene. Kneeling: John and Nick.
This jump and blog dedicated to Bill. Thanks to you all, what a fantastic experience.

There is video to follow, but I currently don’t have any way to get it from my skydive video camera onto my computer, but will put something up as soon as I can borrow a computer with a FireWire port.