There’s good news and bad news. Which do you want first? In slightly less tan traditional form, I’ll start with the good news. ebay refunded the last of my listing fees, and my outstanding bill with them has been reduced to 35 cents. I’m not sure where that comes from, but I’m not going to argue about it! They have been very supportive and helpful throughout, and I have no complaints. I still think it’s a shame however, that they don’t facilitate listing 1005 charity auctions without cost or risk to the seller. I think they are in a position to do so.

Further good news. Val and I are both doing well in terms of maintaining our fit and healthy regime of plenty of excercise and no beer. We faced the biggest challenge so far on Thursday evening, when we wnet to meet Val’s buddies Clint, Larry and Doug in “Benny’s” pub. Both Val and I opted for iced water rather than beer, but our will failed us slightly when the bar owner brought us all shots of Jägermeister. I don’t think there are too many calories in a small shot, are there? 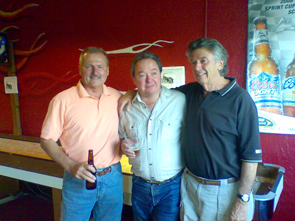 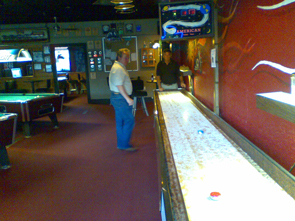 We managed to go and do The Incline again straight afterwards, and both managed respectable times, Val at 32 minutes, and me just short of 39 minutes.

Unfortunately things did not work out quite so well yesterday, when Val, his friend Mary, and I headed down to Canon City, hoping to do a night jump. Mary has just did her first tandem jump last week in San Diego, and I hope doesn’t mind me mentioning that she is a grandmother of 72 years old. Fantastic! Go on, Rebel Grandma!

But the further south we headed, the gloomier the skies became, and at the dropzone the winds were howling, and the planes were chained to the ground! We hung around for a while in Canon City, and watched a raft race come down the river, but at around 8pm, Skip called any further possibility of jumping off, and the night was a bust.

Tonight is probably my last chance, as it full moon this evening. Sunday will be too late, as most skydivers and dropzone operators will be heading home, and the moon will be rising too late. I’m heading down again tonight, and the forecast is a little better, so am still hopeful of success.

Thursday 24th June
Develop a six-pack stomach – The Incline – 39 mintes
Learn how to lucid dream – no dreams remembered
Set up the “BlindsidedNetwork” support forum – nothing
Raise $50,000 for charity – $400+ recouped from eBay!
Night skydive – nothing
Book deal for 100goals – started to set up new website