I have been skydiving on an irregular basis for over six years now, and have done around 140 jumps in total. I still get a big thrill from it, but do not tend to go regularly enough to progress too much in terms of skills.

At around 100 jumps many people try a nude skydive. I am not really sure why, other than the usual “because it’s there” sort of reason. It is something that has been on a mental to-do list somewhere in the back of my mind, and somehow it got added to the list of 100 goals as it was first written out.

And so as I am back in Perth for a while, and my own skydive gear is here, I decided to make a concerted effort to get another goal ticked off. I rode the motorbike over to the dropzone at York yesterday evening, and over a few beers with a couple of the other early arrivals, tried to recruit a few others to my cause.

I put up an open invite on the cafe door, suggesting anytime mid to late-afternoon on Saturday might be the best time for the jump, hopefully the warmest part of the day.

I did a couple of refresher jumps in the morning and early afternoon, and late in the afternoon, as the last of the tandem skydive customers headed home, four of us gathered to plan our jump. Joining me would be Skydive Express staff members (no pun intended!) Split and Thommo, and parachute packer Crumb. As is often the case at skydive clubs, I have known a couple of these guys for several years, and have no idea what their real names are!

Our jump was going to be the last of the day, and I was extremely grateful to business owner and pilot John for flying the extra load.

We geared up, and to avoid any offense to any remaining customers and their families we wore shorts to get down to the plane. There were only the four of us aboard, and we quickly got to 14,000 feet, and when we got the orange light, and opened the door, it was pretty chilly.

We had all sorts of grand plans for our exit and jump routine, but with no jumpsuit, control in the air is very tricky, and we messed the exit up badly. When we all let go to try to sort it out the two bigger guys (and by that I mean body mass, nothing else!) fell away quickly, and the new slim, lightweight me could simply not catch up to them at all.

Eventually we all had to separate and open our ‘chutes, and fly down to land. Beer was already waiting for us, from the carton I would be required to put on at the bar, as is customary for any new first skydive achievement or event.

Here’s a video of the whole sordid, messy affair….

So thanks to the others who took part, Thommo, Split and Crumb, to Camilla on camera duty, and to Johno and the rest of the fantastic team at Skydive Express. Time to go and celebrate with a beer or two, as there is a carton of beer waiting on the bar. Cheers!! 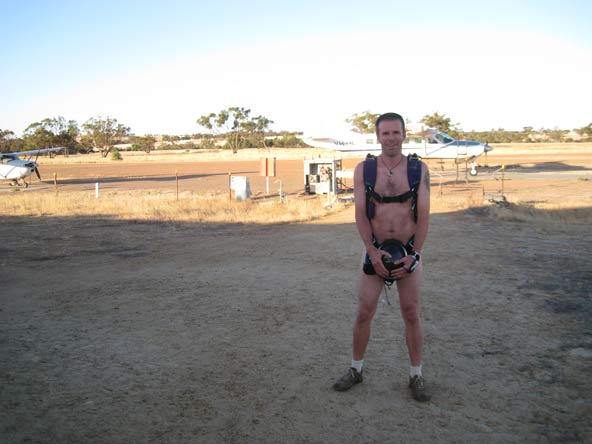