I had to be in Beverley Hills yesterday morning at 11am for another casting agency interview. When I saw a similarly full room to the previous morning my hopes faded, but when I had a brief one-on-one interview, things looked much more positive. I now have to go back in on Monday morning for a follow-up, and to have some photos taken – I will update you as things progress.

However, my plans have now had to change a little. I took the RV into Beverley Hills yesterday, and parking it proved to be a bit of a challenge! After that, I drove out to Lake Elsinore, where Skydive Elsinore is located, and am staying here for a couple of nights, but plans to head onwards down to San Diego have been cancelled, or at least postponed for now.

I got to the dropzone yesterday afternoon, and by the time I got paperwork sorted out it really wasn’t worth hiring a rig for the rest of the afternoon, so happily watched the action.

It is the biggest and busiest skydive meet I have ever been to, and is largely aimed at female skydivers, as the event is called “Chicks Rock!”, although there are also plenty of guys here to jump. They were running three large planes yesterday, and had a big meal and 70s theme party in the evening. Today they ran two planes and a helicopter too.

So this morning I had to get up early and join the queue to hire a parachute for the day, and then wait for the helicopter jumps to start. There was a bit of a mix up initially, as we were booked on in groups of four, and the helicopter could only take three people at a time. However, in the re-shuffle I was bumped up from load 9 to load 5, and geared up when the time came.

The helicopter was pretty small, with open sides, and I squeezed in behind the pilot, the other couple taking the two left seats. We took off, and the small machine climbed pretty quickly, and it didn’t seem very long before we were above 4,000 feet and the pilot gave us a two minute warning. 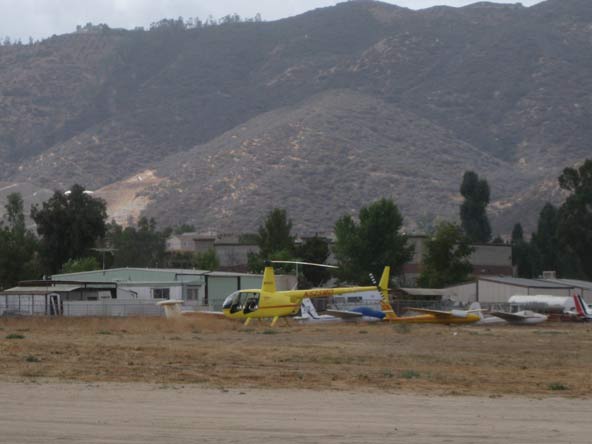 I was first to exit, and when given the go-ahead, climbed out of the door and stood on the skid. I gave the others a quick nod and tried to take in the experience, but couldn’t hesitate too long. I jumped backwards, and watched the helicopter appear to accelerate upwards as I fell away from it.

It is quite a different experience to jumping from a plane, as at first there is no wind, and before you pick up speed you really have very little control over how you fall. And the feeling of falling from a stand-still is quite intense. As I gathered speed though the familiar feel came back, and after a very short freefall I threw the pilot chute and once the parachute was open, got my bearings and made a pretty good landing on the narrow landing area.

My little digital stills camera is not an ideal skydive video camera, but as a home-made glove-cam fastened into a modified glove on my left hand, does manage to capture some pretty good video. Take a look at Goal # 60 being achieved:

Later in the day I did a couple of jumps from the plane at 12,500 feet, which was fun. Chatting with a few of the other helicopter jumpers later, I discovered, somewhat ironically, that Perris Skydiving, just down the road, where I tried out their wind-tunnel last year, has someone who organises skydives from a hot air balloon. Well, my US funds are a bit tight now, but if I manage to sell the RV in time, I might just see if I can fit a balloon jump in too before I leave the States at the end of the month! We’ll see. But I am elated to have achieved this goal in such a great place.

Many thanks to all at Elsinore for making me so welcome.