Our day off from slogging up the mountains was far from relaxing. After a great night’s sleep at the Days Inn, and a fine breakfast we were on our way to Raven Rafting at the head of Royal Gorge on the Arkansas River, where we met Diane, Val’s cousin, who would be our fifth rafting team member for the day.

We were geared up, some of us opting for wetsuits, other tougher locals happy to simply wear shorts and t-shirts. I went for the warmer wetsuit option! A short minibus ride took us to our start point, and we launched pretty quickly, our guide Carrie happy to give us our instructions and safety talk once we got moving.

The first rapids were pretty shallow, and we scraped and bumped down them, and started to get our paddling teamwork together. We had arrived pretty much at the end of the rafting season, and the river was low, the flow being about 280 cfs (cubic feet per second). In June, when the river flow is at it highest, the flow can be over 3,000 cfs! However, the lower levels would make the trip quite technical, and would mean we would actually have to do a lot more paddling to make our way through.

As the walls of the gorge narrowed and we entered the canyon the rapids got bigger, and we started to drop into some more exciting, tricky sections. At one point we got well and truly stuck, and Carrie later told me that I needed write in the blog for anyone familiar with the river that we were left at Bird Drop (oops!) in Sledgehammer Rapid! I guess we weren’t meant to go that way! It certainly took some teamwork to get us out again.

The scenery was very spectacular, and the steep sided canyon had all sorts of interesting and unusual features. A railway ran through the gorge, and the train passed by a couple of times, filled with waving tourists. There were remnants a water pipe that used to run along just above the river, from a past era of mining here, now just a skeletal framework. There was a steep cog railway up out of the gorge, a rollercoaster that hung out high above us over the steep cliffs, and the highest suspension bridge I have ever seen!

Halfway down the river there was an opportunity to get out of the rafts and do some jumping off the cliffs, which was fun. Well done to Diane, who pushed herself to make the jump, and did so in fine style.

After a couple of final exciting rapids we began the easier final approach into Canon City, and I got to have a go at steering the raft, and calling out the instructions for the rest of the crew, which was fun, although I don’t feel I was quite awarded the same amount of respect that our guide Carrie was!

What a fantastic trip, thanks again to Val for organising things, to Tim, Eric and Diane for joining in too, and of course, to Carrie, our wonderful guide, and the rest of the staff at Raven Rafting. 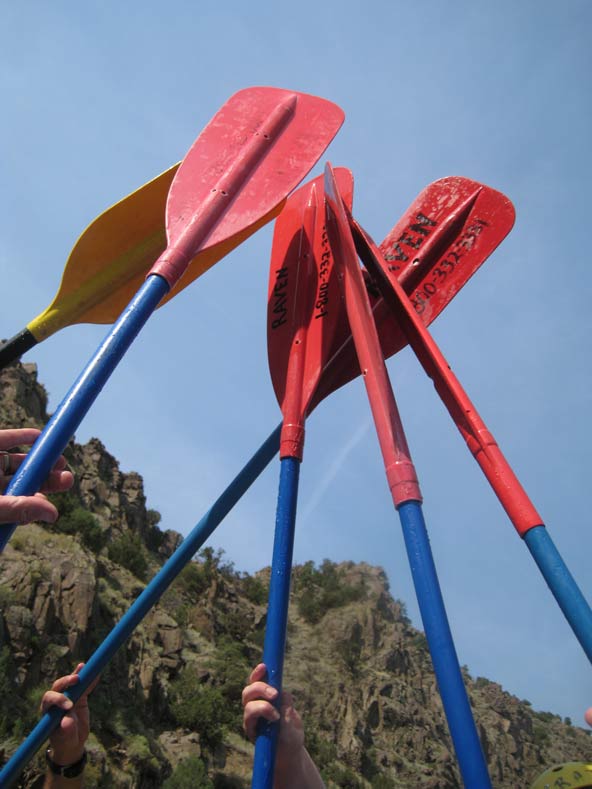 That night we made our way back up into the mountains, up a 4WD track out of Westcliffe, that, believe it or not, made the previous tracks look relatively smooth. We found a fantastic campsite just below Colony Lakes, and made a campfire. I made the most of a couple of hours of down-time to try to catch up on writing about the previous days’ adventures, which seemed to amuse the others. I admit it must look unusual to be sat in the middle of the wilderness with a computer perched on a log, but it’s been a busy week, and you have to fit blog-writing in whenever possible!