I had to drop my “craft” off at the pier before 11am, and then had to be dressed in costume by noon for the judging of the Kingfisher class. The theatre on the pier where the mayor and others came to judge us was filled with a variety of entertaining costumes, including a guy in a hugh crocodile outfit, Laurel and Hardy, naughty nurses, and many others.

At 12.30, there was a mandatory safety briefing for all of the “flyers”, which included the 18 serious flyers from the day before, who would be making a second attempt, as well as the 20 or so Kingfishers. The atmosphere was fantastic, and humourous comments from many of the contestants made the briefing very entertaining.

At 1pm the “flights” began, with a guy in Hawaiian hula girl outfit and a body board plunging off the platform into the water below. He was followed by more spectacular plunges by other crazily dressed competitors, and I took my place in the queue behind “Del Boy” Trotter from UK comedy “Only Fools And Horses”. He had a complete mock-up of Del’s famous car, which failed to fly any further than any of the other Kingfishers, and disintegrated on impact with the water.

It was my turn next, and I waddled up the steep ramp to the platform in my costume. I had opted to “fly” sat astride an ostrich, and had worked on the costume a couple of months before, with much sowing assistance from my mum while last in England. I had also begged shoes for the outfit from my godson Owen, and found the perfect pair of ostrich feet flippers while at a car boot sale down in Devon back in June.

Each contestant was interviewed on camera at the top of the ramp, the pictures being transmitted on the big screens up and down the beach, and streamed live on the internet too. I was asked quite a few questions about both ALife4Sale and 100goals, and was trying to explain my fundraising goal, when I was informed that my time had begun, and I had thirty seconds left! 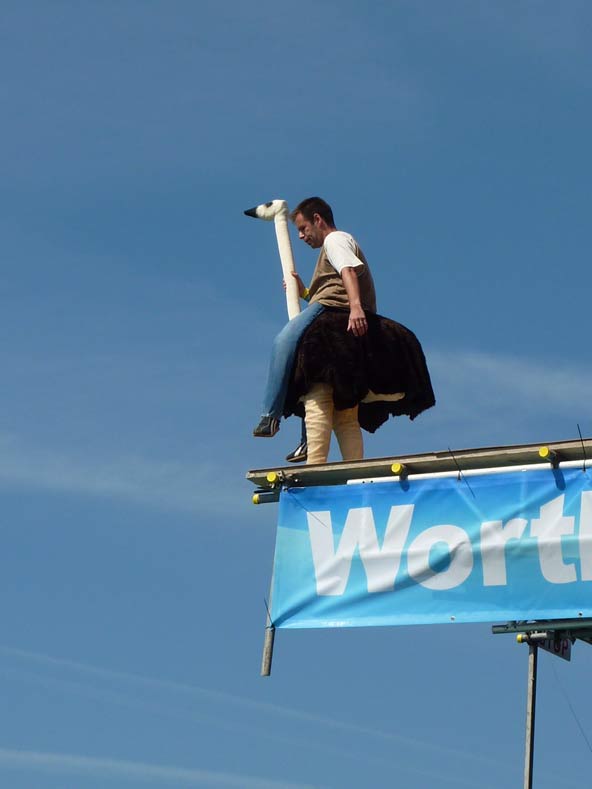 I barely had time to waddle to the end of the platform, and wanted to take the time to actually look off at the height of it. “5 seconds!” I was informed as I looked off the edge. It really was a spectacularly high jump! “Go, go, go!” I heard, and I flew – well, plumetted really! It was a long fall, and I hit the water pretty hard, but the ostrich costume protected me well.

The safety boat arrived and I was dragged aboard completely waterlogged! We waited for the next competitor, who had managed to split his lip and was bleeding a bit. I saw him interviewed later on the beach, and he was still shaking!

I got changed, thrilled by the jump, and went to watch the last of the Kingfishers, followed by the more serious flyers. (“Are you suggesting that we are not serious?” a guy in an outrageous drag outfit beside me at the safety briefing had asked loudly!)

Unfortunately the wind conditions were not as good as the previous day, and nobody came anywhere near the previous days’ fantastic efforts, but the sun was out, and for the spectators the weather was fantastic.

Worthing Council did an absolutely awesome job of organising a fantastic event, which all seemed to go very smoothly. The English summer weather was perfect for the whole weekend, other than wind direction on the second day, and the crowds were huge.

Many thanks to all who made this goal possible, including my costume designers, contributors and assistants – mainly mum and Owen! Also to Martin, Rachel and Rob, as well as one of the other Ian Ushers and family for coming along to offer support and encouragement. And huge thanks to Michelle for being a wonderful Worthing host. A brilliant weekend all round. More from the BBC here (thanks to “tacobet” on the forum for the link):-
http://news.bbc.co.uk/1/hi/england/sussex/8217125.stm

I now have to dash back to Heathrow, and will be back in Colorado tonight. Quite surreal.