I flew from Tampa down to Cancun on Tuesday, and made my way to the hostel that I had booked, managing to check in just before lunch time. I got settled in and read about two pages of my book before I fell asleep. I woke at 7pm, having slept deeply for about 6 hours. Over the past few days I have been battling jetlag, and have not been sleeping too well, but I felt great when I woke up in the evening.

I didn’t get much of a chance to have a look around Cancun, but did go out for some dinner, then slept again. I think I was pretty run down.

In the morning I went to the reception of the nearby Soberanis Hotel, where I was picked up for my tour of Chichen Itza. This goal was the last one added to my list of 100, after another of my goals became impossible when the business shut down. More details here and here. Chichen Itza is one of the New 7 Wonders of the World, and is now the third one that I have seen, having been to both the Colosseum in Rome, and Petra in Jordan before. Four more to go, all of which are on my 100goals list.

We gathered several others from other hotels, and eventually set off on the two-hour drive to Chichen Itza. We stopped for a while for a period of enforced tourist shopping, but the racks of tacky Mexican souvenirs soon drove me out onto the main road for a look around.

We arrived at Chichen Itza itself at around 1pm, and were issued tickets, and with slight dismay I found myself as part of a large tourist group, following a flag-waving guide. However, the historical background was very interesting, and after a while we were set loose to explore on our own.

The first thing that you see as you enter, after running the gauntlet of enthusiastic local vendors, is the spectacular central pyramid. But that is only one part of the whole place. Between 600 and 1200 AD this place, whose name means “at the mouth of the Itza (a family name) well”, was a thriving Mayan city of an estimated 50,000 citizens.

There are many structures, including a huge games arena called the ball court, where a game which resulted in sacrificial beheadings of the losers (or possibly winners) was played. There is a huge area made up of a thousand pillars, which was a covered marketplace, and many other buildings, thought to include an observatory, nunnery, church, and much more.

Also fascinating was the deep Sacred Cenote, a deep limestone sinkhole, where it is thought that all sorts of sacrifices, including human ones, were made. All sorts of artifacts and human remains have been found in the water there.

Once away from the tour groups it was easy to wander away from the crowds, and is often the case in these places, if you are prepared to do a little extra walking, you can find yourself totally alone. I wandered through quiet remains with nothing but the sounds of the jungle around me, and it was easy to imagine how it might have been when the Mayans lived and thrived here.

But it is the central pyramid that drew mw back to the more crowded areas. It is a beautiful building, but even more so when the extraordinary geometrical and astronomical principles built into the design are explained. There is an incredible precision to the design that means that on the equinoxes, the sun lights the structure with an almost unbelievable accuracy to produce the effect of a snake descending the side of the pyramid.

Time passed quickly, and I headed back to the tour bus for the next part of the trip. We were taken to another cenote nearby, and had time to go swimming in the cool fresh water of the amazing limestone sinkhole. Trees grew around the edge with huge long roots trailing down to the water. Small black catfish swam around in the clear water, and people jumped and swam.

I took some pictures, and then went to jump off the high walkway. I soon wished I hadn’t! Something hurt my left foot as I hit the water, and as I climbed out, I discovered that my big toe was bleeding quite badly, and something black was buried in the underside of it. It is quite painful to stand on, and all I can think is that I landed on a fish as I plunged into the water. I thought at first I might have broken my toe, but it is a lot less painful today. However, I will certainly have to remove the suspected fish spine that is still in there! Ouch!

At the evening sound and light presentation, the equinox sunlight effect of the descending snake is reproduced artificially, and really must be quite something to see for real. How did they manage to build so precisely? Absolutely fascinating.

What a fantastic place to see, and well-deserving of it’s place as one of the New 7 Wonders of the World. I have one day left now in Cancun, which I will spend hobbling around the downtown area exploring, before I fly back to the States and try to convince them to let me back in again. 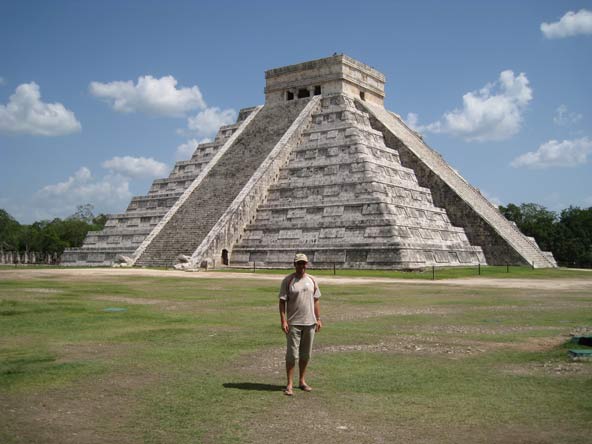 Fantastic pictures of Chichen Itza. It's a wonder that so much of it is still standing and in such good shape!

If the US Customs guys give you too much trouble, just have them give me a call; I'll vouch for you!