Well, it wasn’t quite 20,000 leagues, more like 20 feet under the sea, but it was still a boyhood dream come true.

Nancy gave me a quick tour around Fort Lauderdale yesterday morning, and then dropped me off to collect my car. It took me a couple of hours to drive down to Key Largo, where I soon found Jules’ Undersea Lodge, just off the main highway. After some brief paperwork, I was ready to go, and geared up with scuba equipment. No wetsuit would be required, as the water was almost as warm as bathwater.

My instructor/hotel guide Jason showed me the surface control room and explained the communication systems with the lodge below. He put the belongings I would need down below into a small waterproof case, and we entered the lagoon.

I spent twenty minutes or so exploring the area, while Jason prepared the hotel, and unpacked my gear down there. Eventually I made my way through the rather murky water to the hotel itself, and swimming below it, came up into the wet room via the moon-pool entrance. It was a very atmospheric moment, something I had imagined doing for such a long time.

After Jason gave me a quick tour, he left me alone and I was free to explore, rather like an excited child! The place was great, an odd mixture of old, practical functionality, and modern comfort.

It was originally built as a research station, and was used as such between 1972 and 1975, and then in the early 80s was converted to it’s current use. Just under the veneer of comfortable hotel, in many of the cupboards I looked in there are valves and pipes and pumps all humming and buzzing away. 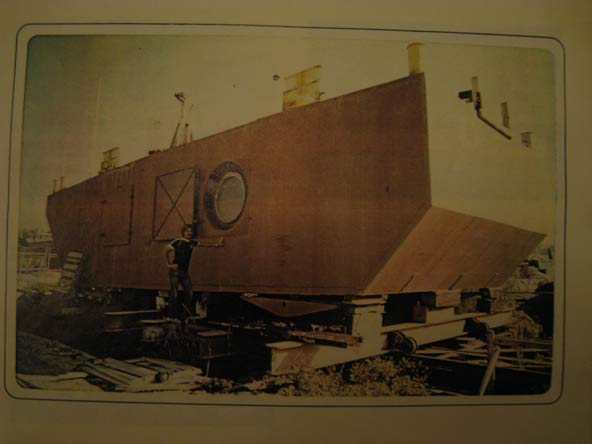 I made myself comfortable, and at 6pm Jason brought dinner down, again in a watertight case, and made the final preparations in the microwave in the small kitchen. It was all quite a bizarre experience. He then left, and I started watching an entertainingiy terrible underwater movie called “Leviathan”, where the inhabitants of an underwater mining base are troubled with alien issues.

Once dinner had settled, I geared up and went for a dive in the lagoon. Once again it was wonderful to exit throught the moon-pool and already be at a depth of 20 feet. I spent some time examining the hotel itself, fascinated by the structure. It is quite impressively big outside, compared to the smaller space inside, but was built with all sorts of ballast tanks, so it could originally be floated into place, then the tanks flooded to sink it into position, much like a submarine. It is quite an extraordinary feat of engineering.

Later, when it went dark, I went out for a second dive in the now very gloomy and eerie lagoon. Jason had told me that a couple of nurse sharks sometimes came in at night to sleep under one of the piers, but I couldn’t find them. I followed a lobster around the seabed for a while, and got pretty dis-orientated, and then made my way back “home”.

I slept really well, and woke in the morning just as the large bedroom porthole window was beginning to lighten. I helped myself to breakfast and coffee in the small but well organised kitchen, and Jason gave me a call to come and collect me.

I had been living under the sea for around 18 hours, and as I surfaced, I wished it could have been much longer. It was so atmospheric, and so unique.

Many thanks to Jason and Debbie at Jules’ Lodge for such a greta experience, and thanks also to my surface support crew members Cari and Nancy for helping make this long-held dream come true.

That looks so wicked cool.. If I could SCUBA I'd probaby want to live there for a week, or more! But being a scardy cat I'll just have to continue leaving vicariously through you!

My question is .. Oxygen! How do they air the underwater hotel? Is there faucilities to recharge your tanks too?

Fascinating. Is there just one room? It doesn't look big enough for many more.

I love the choice of movie – really gets you in the mood, eh? I think the original Creature From The Black Lagoon would've been better, though. 😉