I have long been an admirer of Richard Branson, and have mentioned him in several of by past blog postings:-
Screw It, Let’s Do It!
Kitesurfing, Richard Branson and naked supermodels!
Help needed… yes, again!

And so it was with great excitement that I headed into central London this morning with my brother Martin.

While back in Australia I had done some internet searching, and had found email addresses for several people at Virgin Blue, the Australian-based Virgin airline. I sent a couple of emails, and got a reply suggesting that I might be able to meet Richard next time he was in Australia. Unfortunately that wouldn’t be until November 2009, and I was not sure that I would be back in the country by then.

However, my email had been forwarded to a Virgin PR person in the UK, and I followed up by emailing her. I got a response from Richard’s personal assistant, who said that Richard would be happy to meet me when he was next in Australia.

While in Cannes, I heard rumours that Richard may be heading down to Monaco, which is just along the coast, for the Grand Prix, so sent another email to his PA, explaining where I was, and that I would also be in the UK for the following few weeks. I was amazed to get a response from Richard himself!

He invited me to the unveiling of a plaque to commemorate the life of WWII fighter pilot, Douglas Bader, and suggested that I could then jump in the car with him afterwards as he headed for the airport.

So Martin and I arrived early, and waited in the small city centre mews as the TV crews and the crowd gathered, watching the plaque get polished in preparation.

Eventually Richard arrived, and when he appeared to have a relatively quiet moment I took the opportunity to introduce myself. In terms of my hopes and expectations for this goal, I had already achieved what I set out to do, but Richard confirmed that I could join him after the ceremony for the trip to the airport.

The ceremony was interesting, and if you don’t know the story of Douglas Bader, it is well worth reading. Despite the loss of both legs in an aeroplane crash in 1931, he went on to become one of the most successful war-time fighter pilots. There is also a movie about his exploits, called “Reach For The Sky”, which I watched again just last week. A very inspiring man!

Richard was there because he wanted to support the “Douglas Bader Foundation”, which exists to advance and promote the physical, mental and spiritual welfare of persons who are without one or more limbs, or otherwise physically disabled. But he was also there because he had met Douglas Bader while he was a boy, as Douglas and his aunt Clare had been close friends. He told the amusing tale of how as a mischievous 7-year-old he had stolen Douglas’s artificial legs while he was swimming, and had been chased by an irate legless Douglas dragging himself along after him!

After the ceremony was over, Richard made his way back to his waiting car, and I joined him, and after a quick photo we headed towards Heathrow. 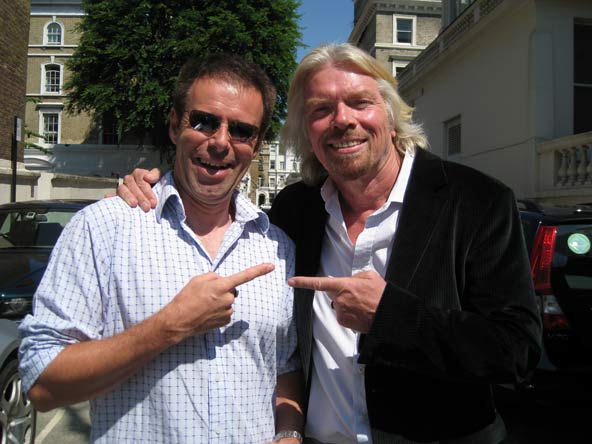 We spoke about many things, and I thoroughly enjoyed the half-an-hour I got to share with him. He is very down to earth, and easy to chat to. I asked him about current ventures, and was particularly interested in recent progress with the amazing Virgin Galactic project.

He asked many questions about my goals, and I told him of a couple that I am currently working on, including my current fundraising efforts for Bowel Cancer Research, and my attempt to gather 5 Ian Ushers in one place!

He made a very kind offer, and said that he would donate $500 to the Bowel Cancer Research and Awareness Institute, for every Ian Usher that I managed to gather, but only if I do manage to achieve my goal and gather a minimum of five of us!!

Pressure is on now! Come on, Ians!

Thanks to my brother once again for getting me to another goal on time, and of course, enormous thanks to Richard for fitting me in to his busy schedule, and allowing me to complete another goal in a manner way beyond any of my expectations. Thank you very much!

That is fantastic! I thought you would find this goal much more difficult, frankly, so I'm glad to see it happened and was such a pleasure. Good luck getting those Ian Ushers into one place so you can collect from Sir Branson! (You've met my "Ian" but different last name, alas!)

Douglas Bader. A name from my childhood classroom. Wonderful experience for you Ian.

Yes, a name from my childhood too Bernardine… from the movie: “Reach For The Sky”
http://www.imdb.com/title/tt0049665