The Grand Canyon is simply stunning. Without a doubt it meets and surpasses all expectations.

It was a beautiful crisp clear morning as I drove up from Flagstaff, and by the time I arrived at Little Colorado River Canyon, just before the Grand Canyon itself, it was lovely and warm. I had been very lucky with the weather, which could have been awful at this time of the year.

It was lunchtime by the time I entered the National Park, and my first view of the canyon left me breathless. It is HUGE! Words really cannot describe this place, so I will let a few photos try to instead, but I know that they too do not do this place true justice.

I eventually drove along to the Grand Canyon Visitor Centre, and found a place at the campsite to park up, and caught the free shuttle bus back to the canyon rim to watch the sun set. It was lovely to see, but I felt pretty much alone, as this is the first goal that I have achieved without anyone coming along to join me. And as the canyon walls became tinged with orange, I became slightly tinged with melancholy. It would be nice to share this with someone.

I was reminded very much of the words of Christopher McCandless in the movie “Into The Wild”, which I have written about before here, when he realised:-
“Happiness is only real when shared.” 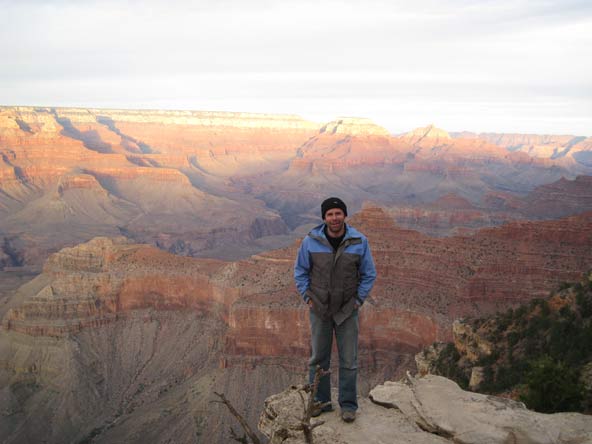 The next morning I was up before dawn, and wrapped up well, headed back to the canyon rim to watch the sunrise. Absolutely beautiful. It was another beautiful crisp, cloudless morning. I really could not have hoped for better weather for this visit.

The words of acclaimed geologist Clarence Dutton, written in 1882, sum up very succinctly my feelings about the Grand Canyon. “The Grand Canyon at first bewilders and at length overpowers. Dimensions mean nothing to the senses, all that we are conscious of is a troubled sense of immensity.”

As Françoise said, your happiness was shared, just in a digital way if not in person. Those are great pictures, even if they can’t possibly capture the dimensions and grandeur. Better than the pics my parents took on their recent trip! Now step away from that ledge! Hopefully that one shot looked more precarious that it actually was.

I know that feeling of seeing beauty and wanting to experience it with someone else. But as the others have said, we are all sharing each goal vicariously. What an excellent job you’re doing with your photographs and writing. I so wish I could have physically been there with you, but never think that you’re alone. We are all there with you! (In a less risky, cheap way!)