From the beach to the snow.

About five hours of driving took us to Chamonix, high in the French Alps. We soon found a campsite and got set up quickly and then headed into town for dinner. Returning later we just managed to get into the tent before the rain began!

It rained most of the night, but the tent faired well, and pretty much everything was still dry in the morning. The weather was a bit grim, with low cloud and rain in the air, but we carried on as planned, and bought a mountain pass to use the cable cars, and for only 6 Euros more we decided to buy a two day pass, “just in case the weather is better tomorrow” – always optimistic!

Chamonix is a busy alpine town catering in summer to holiday-makers and serious summer climbers alike. However on the first grim morning there the cable car was packed with Japanese tourists, and hardly a climber in sight.

The two stages on the cable car take you from the town up to the Aguille Du Midi, at 3842m. To describe this place as incredible would do it an injustice! It is above the snowline, even in the middle of summer, and is an amazing feat of building and engineering.

Unfortunately the view was poor, as we were in the clouds, but while we were there, it actually snowed! It was pretty cold up there! And this was the day after we had been swimming in a pool in the middle of summer trying to keep cool!

Our next journey was on the Mer de Glace rack and pinion railway, celebrating 100 years of service. It climbed steeply up into the mountains, and from its terminus high above the glacier, we took another small cable car, and a walk down some steep steps to the glacier itself.

Here they have bored into the glacier, and you can walk inside it about 50 metres or so. It is absolutely beautiful, and quite incredible to think where you are. The glacier moves about 90 metres each year, and the holes you can see in the picture below are from earlier this season, abandoned as the glacier has moved on.

Back in town it was still raining on and off, but the weather forcast promised better for the next day, so we remained optimistic.

Saturday morning dawned fine and bright, and we were not the only ones who were up for an early start. The queue at the cable car was huge, and most of these were serious climbers, with ropes, ice axes and crampons attached to their bags.

Back at the Aguille Du Midi the views were stunning. I will let the pictures do the talking. 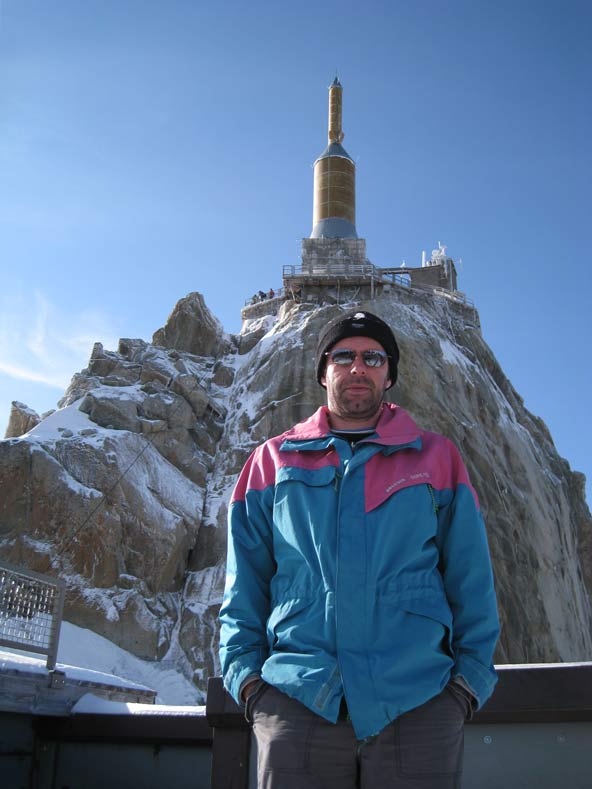