The wine is SO cheap in Spain! As Graham and family in Valencia had been so kind in accomodating and feeding me while I was there, I thought I would buy some wine for the last couple of evenings, and as a celebration for us completing goal number 5 together.

In the supermarket I was amazed to find bottles of wine at 99 (Euro-)cents, and further along the shelf at 79 cents. I bought a couple of more expensive bottles, but couldn’t resist trying the cheapies too, so left the supermarket laden with bottles. The cheapies were just as good as the more expensive ones, and all were lovely, and were greatly enjoyed that evening.

Later that evening I tackled a few emails that I needed to respond to. I had been sent a few email questions earlier that week by French journalist Jean-Jacques Larrochelle, who had done an article on my story during the ALife4Sale period. I answered the questions as best I could that evening, after I had enjoyed quite a bit of fine Chilean wine.

Anyway, I had completely forgotten about sending the answers, until a couple of days later, when I started receiving loads of emails, mainly from French people. A couple of them included a link to the online article version of the story which had appeared in French daily “Le Monde”.

Translating it has been more good practice for my “learning conversational French” goal. I think it is a really good article, although not quite accurate on the actual details of “selling my life”, and the end results of the sale.

Many of the emails I have received have very kindly offered help and assistance when in France, which is unfortunately a little bit late, as I left France a week earlier! Journos please note: an article before I get there would be much better than one after I have just left!! 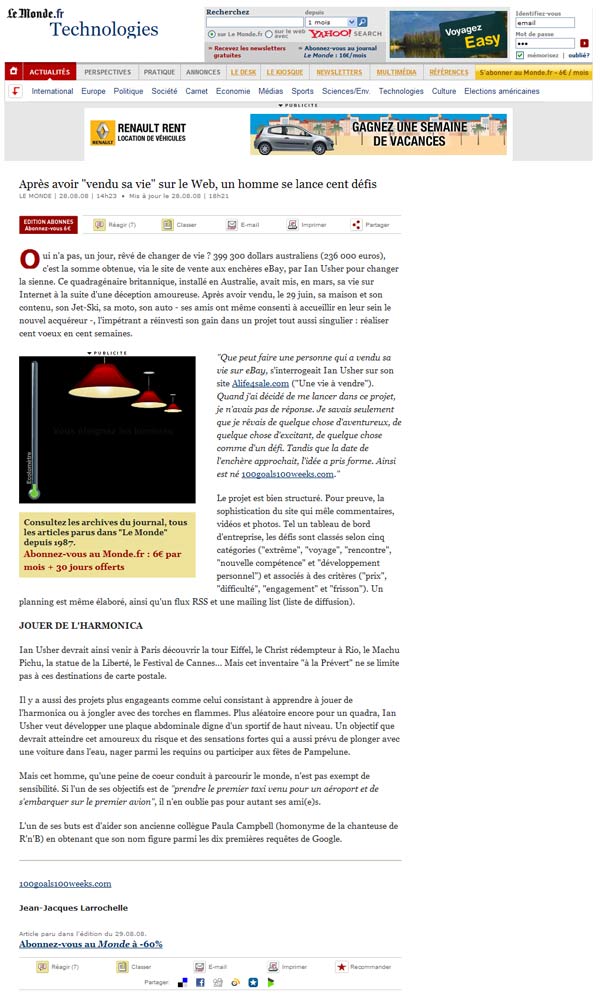