A few days down in Devon.

My friend Simon, who wrote the very first press release about ALife4Sale back in March last year, and started the ball rolling on the huge amount of international coverage that my auction received, lives down in Devon.

So with a few days to spare before heading off to Spain, I packed some stuff in Martin’s trusty car again, and along with Martin and his box of food, we headed west out of London. Martin has a ticket for the huge Glastonbury music festival this weekend, and was meeting up in a motorway services area with his friends who had rented a camper van for the event.

After a quick bite to eat, Martin’s pals showed up, and he moved his gear into the camper van, and I continued south, eventually crossing Dartmoor to find the secluded little cottage where Simon and his family live. I hadn’t been there long before the trials bike was out, and we were thrashing around the abandoned quarry behind his house.

I have never been very good on a trials bike, and watched amazed at some of the hills Simon rode the bike up and down. I managed a slightly lesser hill, but sensibly knew my own limits and declined to come down the bigger, steeper section that Simon encouraged me to tackle. Maybe a bit more practice needed first, I think.

The next day I headed out onto the hills to try to toughen up my legs in preparation for my “7 Peaks” goal in late August in Colorado, and walked to the top of the moors behind the house. The weather was lovely, and the views were spectacular.

Encouraged by my first foray into fitness, I got up this morning, and after a quick breakfast headed out onto the hills again on a slightly more ambitious circuit. I spent a couple of hours wandering around the hilltops, known as tors here, and thoroughly enjoyed the silence and tranquility.

I think Simon and Helen may have trouble getting rid of me, it is so lovely here. However, I think the weather at the moment certainly helps. I can imagine it is a long, cold, grim winter here!

Their roof of their house can just be seen here on the right hand side of the first of the three pictures below – what a fantastic location!

I am having a day off from the fitness training tomorrow, although a quick walk over the moor to the local pub for Sunday lunch may be on the cards. Then on Monday I have planned a route covering a reasonably challenging “Ten Tors in one day”, as more toughening for my legs and feet. Hopefully the weather will remain clear until then! 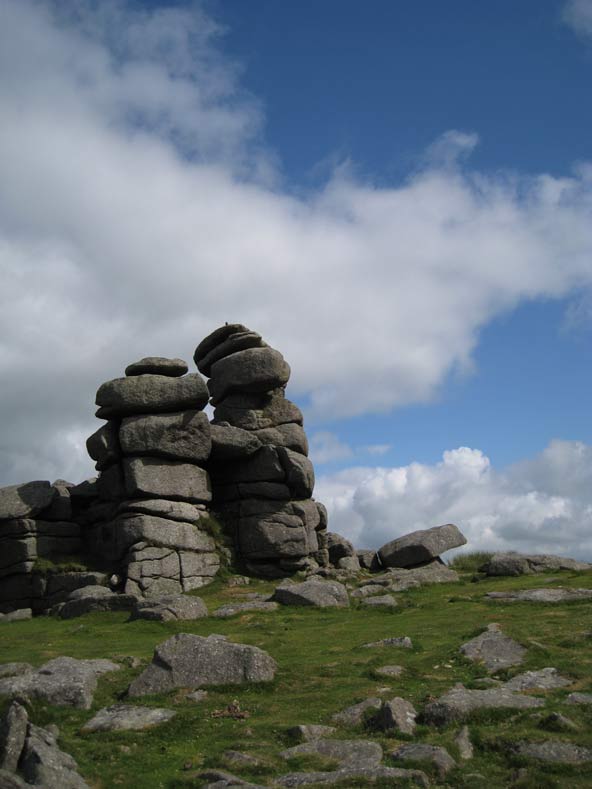