I have been on so many flights over the last sixteen months of travel, that when an alternative is presented, it is usually very appealing. While searching for flights from Bangkok to either Kuala Lumpur or Singapore, I stumbled upon a website about rail travel in Thailand and Malaysia, where it was suggested that it was possible to get all the way down to Singapore for around $50 to $60, way less than half the cost of a flight at the moment.

When I arrived in Surin last week for the Elephant Round-Up, I made sure that one of the first things I did was to book a train ticket back to Bangkok, as I had read that the trains back filled fast, and if I left it until the Sunday, it might have been hard to get a ticket. The best option appeared to be the overnight sleeper train on the Sunday night, which left around 10pm, arriving at 7.30 the next morning in the city. Ticket price – cheaper than the day train, at less that $13.

The sleeper trains are great. The carriages are pretty old, but the whole journey is so atmospheric. Returning from Surin, the beds were already made, and you just climb in and settle in for the night, as the train rattles and clanks steadily westward. In the morning you are woken at around 6am, and the top bed is folded away, and the carriage returned to seating configuration. At each station people board the train selling food and drinks. It’s a slower pace of travel, and it’s nice to just stare out the window watching the country pass by.

And so after a couple of days back in Bangkok with my ex-brother-in-law Tony, going out as often as possible to eat and drink beer, I made my way once again to the railway station yesterday afternoon. I had decided to take a sleeper train again, taking a couple of days to head down to Singapore.

Stage one of the journey is from Bangkok, right down through Thailand and across the border into Malaysia. Departure was around 3pm yestarday afternoon, and I shared my seat area with an interesting Italian guy who had been living in India for over 30 years.

At around 8pm the seats are converted to beds, and I had chosen the bottom bunk for this trip, discovering on my previous journey that they are bigger, darker, and have a window when you wake up – well woth the extra couple of dollars. I slept really well, and in the morning lay in bed watching the world go by again.

Beds were changed back to seats again, and I ate the last of my food, having stocked up for the journey with the very last of my Thai Baht. We eventually crossed into Malaysia, where I saw one of the most amusing border crossing signs I have ever seen, and I’ve seen a lot of border crossings recently too! This one described what could be classed as “hippy” characteristics, grounds enough to deny someone entry to the country! I managed to snap a picture of it subtly when none of the border guards were looking! Brilliant. Click the picture below for a bigger version that you should be able to read:- 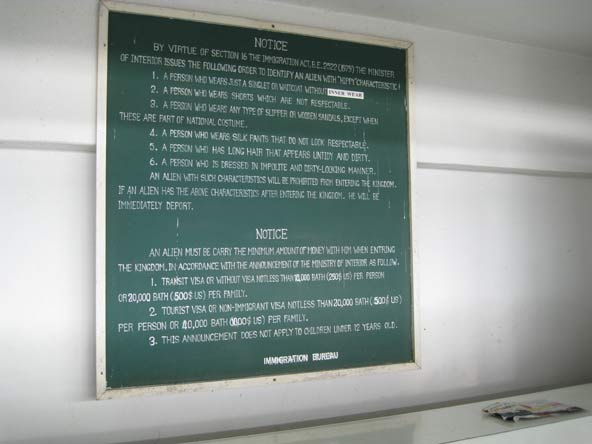 Around lunch time arrived in Butterworth, a mainland port town just by the island of Penang.

I was tempted to take the ferry across to Penang, but by the time I had changed some money, sorted out the next part of the rail journey which starts early in the morning, found a hotel and had something to eat, I really couldn’t be bothered. I have been to Penang before, so decided to have an easy afternoon and evening, and took a bit of a stroll around the rather industrial Butterworth.

I hadn’t realised that tomorrow is a big holiday in Malaysia, and I think I was lucky to get a ticket on the train leaving at 7am. I’m not particularly looking forward to this next section of the journey, 14 daytime hours from here down through Kuala Lumpur and onward to Singapore.

The timing is pretty good though, as I can get to the airport there late tomorrow evening, crash there for the night, and be ready for the early morning flight out to Christmas Island.

It’s certainly going to be a long few days of travelling! My thanks to Tony for his wonderful Bangkok hospitality. Good to catch up again. 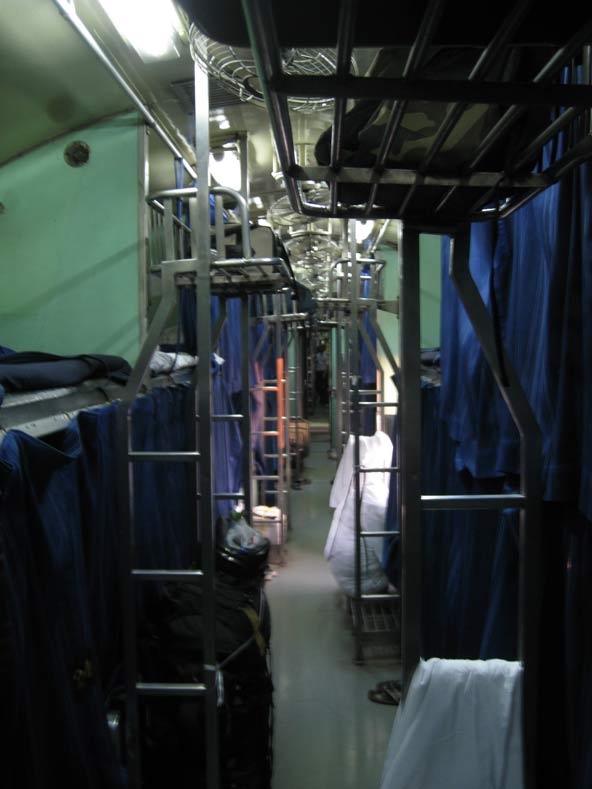