The main elephant show at the Surin Elephant Round Up takes place on both the Saturday and Sunday mornings. I had gone shopping for a ticket on Friday, and had bought a ticket for the second show on the Sunday, as Saturday was selling out fast.

This morning I wandered to the stadium, buying a couple of BBQ sticks for breakfast on the way from one of the many street-cart vendors. One of my favourite things about Thailand is that you never really have to consider food. You can simply wander around, and there is a wealth of great stuff on sale from carts or small roadside restaurants anywhere you go.

I bumped into Irene again at the entrance to the stadium, but had to go our separate ways, as we had different tickets. For a while I sat chatting with the Thai family in the seats next to me, and enjoyed the show, which ran to pretty-much the same timetable as the rehersal I had seen on the Thursday morning.

Once again, my favourite part was when over 200 elephants streamed into the stadium from all directions, and circled around in the centre – absolutely breath-taking. 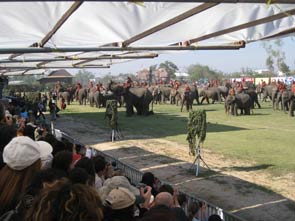 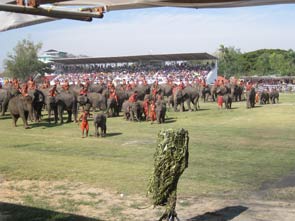 When the elephant tug-of-war was announced, an invite was issued for the “farangs” (foreigners) to come down onto the field, and I couldn’t resist the chance to join in, meeting Irene again on the way to the middle of the stadium. Our team of around sixty of us were fairly easily beaten by the incredibly strong elephant.

Irene was pretending to be a press photographer, and simply stayed down on the edge of the field, so I did the same, and had a brilliant front row view of the elephant football game. Next we waved cameras about and blagged our way into the expensive seating, and high up in the stands had a great view over the whole field for the mock battle finale.

What an awesome spectacle the whole event is. This year is the 49th time the festival has been held, so I suspect next year will be a huge event, and I would heartily recommend that any elephant fan should make the trip to experience this incredible gathering.

Thanks again to Irene for her “press-photographer” skills, and for blagging one of the Surin 2009 floor mats for me as a fantastic souvenir.