Perth has quite a few outdoor cinemas which run throughout the summer season. The weather is ideal for sitting out under the stars watching a movie on the big screen. Some of them have organised seating, others have a large grassed area where people can bring their own blankets, bean bags or deckchairs.

People often make a night of it, by taking a hamper of food, a few beers or wine, and have a picnic before the movie starts.

Last night I went with a few friends to the Somerville Outdoor Cinema in the grounds of UWA (University of Western Australia) to see the documentary “War Dance”.

The cinema is in a lovely setting, the screen framed by pine trees, and comfortable seats set out in rows. We had taken jumpers and blankets, as it is now autumn, and the evenings are getting cooler – this is the last week of the outdoor cinema season this year at Somerville.

The movie we saw was called “War Dance”, which is an amazing documentary following the lives of a group of children from a school in a refugee camp in northern Uganda as the enter the national tribal dance conpetition, and travel to Kampala to compete. While the dancing is spectacular and joyous, the story behind the lives of the children is heart-breaking.

They have gone through such terror and hardship, and tell their stories with such directness, that it is impossible not to feel their pain and suffering. One of the most confronting scenes is where one of the young girls lies sobbing in the bush where her murdered father is buried, and her mother tries to quieten her, because they are still in the bush in rebel country, and it is not safe to make too much noise.

There is such a huge contrast in the pain and terror and sadness of the childrens’ stories to the absolute joy and pride they show and feel when they dance.

This is an absolute must-see film for anyone who thinks they are having a bad time of things. It certainly puts your own worries and concerns into perspective, and the thoughts it provokes linger on long after the credits roll. 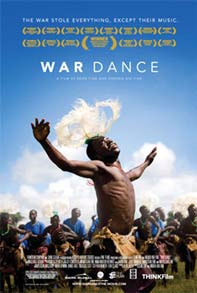