72 days to go!! Where did all the publicity begin?

When I first decided that I was going to sell my life, I realised that one of the main things that I had to achieve was to let as many people as possible know that this was going to take place. After all, what is the point of having an auction if nobody knows it is taking place? I hoped that I may be able to get something in the local newspapers, and perhaps something on a local radio station breakfast show. In my wildest dreams I hoped that a program such as “Today Tonight” or “A Current Affair”, Australian early-evening current affairs shows, would be interested. But I didn’t really think they would be.

I had all sorts of plans on how to spread the word via the internet. I would ask friends to forward an email for me in the hope that it would spread. I would write to YouTube asking if I could get a video featured with them. I would ask eBay to mention it in their newsletter. I would set up a FaceBook page and a MySpace page.

I was hoping that there would be enough interest that word would spread virally across the internet.

Well, it didn’t quite work out that way! I did write to both YouTube and eBay, but never got the chance to follow up with FaceBook and MySpace, because publicity-wise, the results exceeded even my wildest dreams.

I had told my friend Simon in the UK what I was about to do. He works as a freelance journalist, and he said he would write a piece and see if he could get it in a UK paper for me. He tried a few of the national daily newspapers, and had only a small amount of interest.

He had also offered his piece to The Northern Echo, my old hometown newspaper, who were interested, and rang me for further details, and then ran a full page article. From there, the next day several UK national papers called me, and the day afterwards things just went mad. My phone never stopped ringing, Australian TV, UK breakfast TV, newspapers.

And it pretty much continued in the same manner for two weeks, all across the world.

I had not seen the original article until a couple of days ago. There is an online version, but my mum in England just posted me a copy of the article cut from the paper. So here it is, the article that started it all for me, thank you Northern Echo.

Click on the picture below to see a larger version. 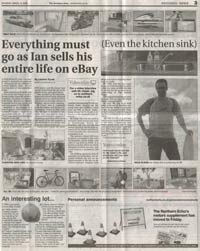