Our couchsurfing guests have dwindled a little over the past couple of weeks, but perhaps because we limited visitors to weekends only for a while. Moe works through the week, and when she is at work it is my opportunity to get some work done on the “A LIFE SOLD” book. But with couchsurfers here a lot of the time it was easy to get distracted, and hang out with them rather than getting down to some serious writing!

So with a couple of solid weeks of work behind me I now have a complete first draft, and have started the editing process! Still quite a bit of work to do, but there is now light at the end of the tunnel, and I am still aiming for publication before the end of October.

I have been working a little on the Whitehorse couchsurfing group that I started, and have now sent out invites for the second gathering in town, planned for Friday 24th September. While perusing the latest group posts on Saturday morning I spotted a request from Andy, who has been paddling up the west coast, and was looking for a lift south back to the States.

As we drove into town that morning we spotted a hitcher on the road, heading in the opposite direction, with a couple of paddles and a sign for “USA”. I know who that is, I exclaimed, feeling sorry for him standing in the rain.

Several hours later, as we headed home after some Whitehorse sightseeing, we spotted him again! We stopped to say hello, and offered him a place to stay for the evening. Andy eventually stayed for a couple of nights, and booked a fantastic last-minute flight back to Colorado. So as he was here on Sunday, we took him along to the September Dryland Dog Races with us.

The races were in a different location to last month, and the trails longer and tougher. After my pleasing performance last time out, I was enthusiastic, and entered the pet dog bicycle race, the one/two-dog bicycle race, and the mass start grand finale. Moe, Finn and Maible all ran in the canicross (running-with-a-dog) race, and Finn joined in the long bicycle race too with one dog.

Competition was much stiffer than last month, with many more competitors. I had been doing some practicing with pet dog Zoli, and was reasonably confident, but others had faster, stronger dogs that didn’t get distracted by every bystander. I took a big fall when Zoli suddenly stopped to visit one of the photographers!

In the running, Finn did very well, looking absolutely worn out at the finish line, having been dragged around the course by a very enthusiastic and swift dog, The Blur. Maible and Moe did well too, Maible giving Zoli another run around the course.

I thought I had been fast in the two-dog bike race, and managed a respectable 9th place finish among tough competition, two minutes behind the winner. Finn did a fantastic job on the tricky course with just one dog.

The highlight of the day though was the mass start race on the grassy landing strip nearby, with a fast straight run to a fairly tight left-hand turn onto a trail for the return to the start/finish. For a couple of seconds my dogs Warrior and Wham nosed ahead a little, but we were overhauled by faster, fitter teams. Moe has only just started training her dogs this season, so they aren’t too strong yet. 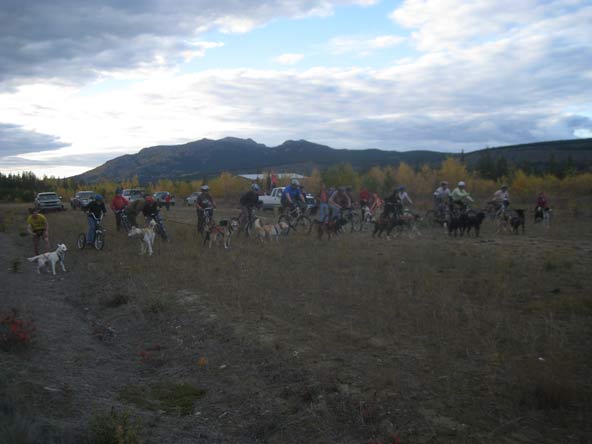 The race was incredibly thrilling, reminding me a little of the chariot race scene in “Ben Hur”, but without the spikes on the axles! It was fantastic to be hurtling along at such speed with so many others!

Andy managed to join in for this final race too, running with The Blur, and thoroughly enjoying himself.

What a fantastic day once again. Huge thanks to Hans and Susie for organising the trails and welcoming everyone afterwards in their beautiful cabin, and to all others involved in the organisation too.