Wobbly Goal 89 achieved at the BBQ.

Goal #89 has been a long time in the making, going back more than a year, when Mel in Perth bought herself a unicycle, and I had a few goes at trying to ride it during the months I spent there after my first 7 months of travel.

In December last year, when it became obvious that I was never going to get to play in the Sedgefield Ball Game, as it took place on the same day as the culmination of Carnivale in Rio, learning to ride a unicycle was added as a late substitute goal.

At the time I could only get about 10 yards at best, but I have been doing quite a lot of practice over the past few weeks here in Colorado, and last night was a chance to demonstrate my newly acquired skills.

And so at the BBQ that Val and Brenda had arranged, I had an audience of 11 when I made my attempt on wobbly goal #89.

I haven’t yet mastered the art of getting on without a wall or step-ladder to help, but I had set myself a target of at least 50 yards without falling off to achieve the goal.

I made it about halfway on the first attempt, but on the second go, made it confidently past the 200 feet mark that Val and I had measured earlier in the week. I also impressed myself by managing my first full figure-of-8 too!

Thanks to Mel, who got me started with this goal, to Val and his work colleague Laura, who arranged a unicycle for me to practice on here, and to all who cheered me on last night too. After my success, I treated myself to a couple of celebratory pints of beer from John’s wonderful homebrew IPA.

Some video of my wobbly ride here:

We were up early in the morning, and at 6.30am seven of us met to tackle The Incline again. It was already getting hot at that time, and hindered slightly by the previous nights beer and BBQ food, I managed a respectable 40 minutes. I was very proud to beat Val for what I imagine will be the one and only time. He was even more hindered by many more beers, and plenty of cheesecake from the previous evening! 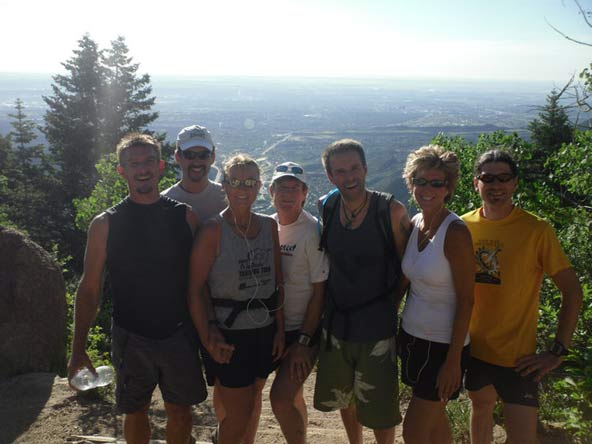 I set off immediately afterwards for the Skydive Colorado dropzone, and within ten minutes of arriving, once my gear and licence had been checked-out, I was on my first load of the day. Conditions were wonderfully clear, and it was a great jump, the first since leaving Australia in April. The view of the Royal Gorge Bridge was spectacular.

Wind stopped jumping for much of the afternoon, but I managed to squeeze one more jump in, with a bit of a telling-off afterwards from the chief instructor about going too far downwind in blustery conditions.

Hopefully I am now ready for a night jump next weekend when it is full moon once again. I just hope the weather conditions are favourable! Thanks to all at the dropzone who were so welcoming.