“Well it winds from Chicago to LA…”

I set off from Chicago first thing on Monday morning to begin my Route 66 trip. I picked up the RV as early as I could, and attached the licence plates that I had received for it, and after a quick check-over, was ready to go.

The first few miles in any secondhand vehicle are always the most nerve-wracking, as you hope that no major problems are going to reveal themselves, such as overheating, or strange noises from the engine bay.

Fortunately all went well, and after only one small detour through the countryside, I eventually found my way onto Route 55 towards Springfield, Illinois.

I took it pretty easy, and stopped a couple of times to check out the RV, and all continued to be well, and I eventually made it to Springfield in the late afternoon. After quite a while driving around completely lost, I eventually found the city centre, and parked up to make a quick phone call.

I had hoped to have a local Springfield guide, but when I called, Joni was pretty ill, so I was on my own for the evening. She gave me directions to the nearest Walmart, and I headed there and parked up. Walmarts superstores are very RV-friendly, and at most of them overnight RV parking is allowed in their securely monitored carparks. I confirmed that I would be able to stay there, and headed off for dinner.

The Cozy Dog Drive-In is, apparently, the birthplace of the original corn dog, which Joni had recommended I should try. The corn dog is basically a hotdog sausage on a stick, with a coating of corn-based batter. A bit odd, but quite tasty. The drive-in was filled with an amazing array of Route 66 memorabilia.

Back at Walmart I bought some food supplies, some pots and pans, and settled in for the evening. It was pretty cold, and I woke in the middle of the night, absolutely freezing, despite all the clothes layers I was wearing! I really need to figure out how the RV gas central heating system works!

I woke the next morning, ready to take a detour to visit Josh, who had contacted me from Indiana, and before setting off I went back into Walmart and bought a Magellan GPS navigator – hopefully that should prevent too many more navigational problems! 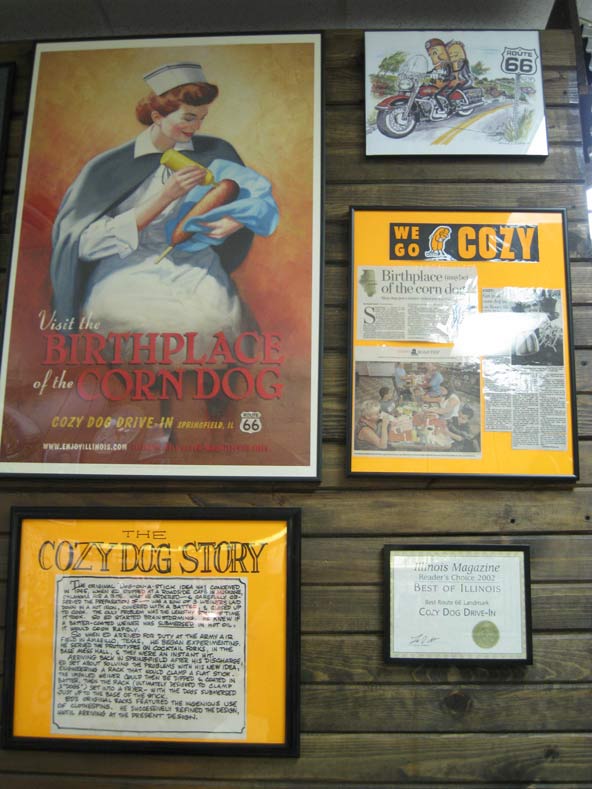