After writing my blog at 5 am yesterday morning I got up and had some breakfast, but as nobody else was up and about, I went back upstairs to read for a while, and wait for the rest of the household to catch up with me. The next thing I knew, it was about 12.30 in the afternoon, Martin had gone to work hours before, and Rachel had been working all morning at home! For me it was still only the equivalent of 5.30am Denver-time.

I had a quick shower and packed Martin’s car, and headed for the south coast, keen to miss the worst of the traffic that would be streaming out of the capital on a Friday afternoon later on.

I made my way to Bognor Regis, the original home of the Bognor Birdman Competition. The pier there was damaged by fire a couple of years ago, and was drastically shortened, and the water at the new end of the pier is no longer deep enough for jumping/flying off!

Bognor is a typical English seaside town, it’s glory years now long behind it. Despite the fact that it is still summer holidays, the windy beach was deserted, and the whole place had a faded, run-down atmosphere about it.

I took some pictures of the folorn pier and empty beach, and then drove ten miles along the coast to Worthing, the new home of the Birdman Competition. Worthing is a lot cleaner, and seems to have a bit more life about it. Although all of the concerts advertised at the Pier Theatre had a distinctly oldies flavour about them!

The pier itself has a huge scaffold construction at the end, and I wandered along to take some pictures. It looked quite alarming, as the tide was right out, and the drop from the platform must be at least 50 feet, onto the sands below. I imagine that the event itself later today and on Sunday afternoon are timed to co-incide with high tide. Even so, the top of the platform is impressively high.

At around 6pm, Michelle called me, letting me know that she had finished work and arrived back at home. Michelle lives in Worthing, a short walk from the pier, and had contacted me through the website, and offered to accomodate me for the weekend. I eventually found the house, and we headed out for a fantastic Mexican meal in town.

Once again it is now around 2am, and I am still wide awake. I will try to sleep as long as possible tomorrow morning, and then am keen to go and see the serious flyers launch themselves off the platform in the afternoon. 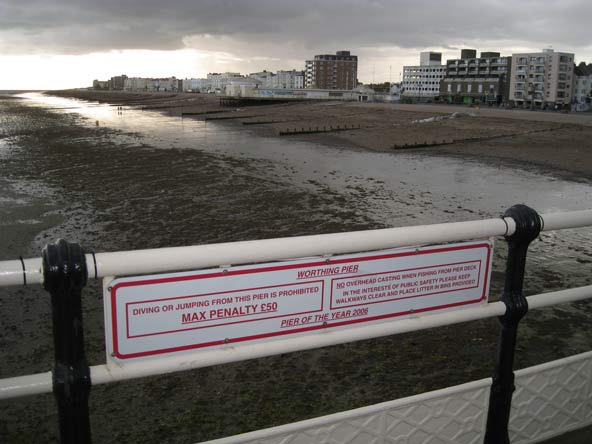