I have surprised myself this weekend with some of the choices I have made. I had made pretty firm plans to set off for the skydiving club on Friday night, and spend the whole day jumping, including hopefully achieving another goal by finally doing a nude skydive.

However, as always, plans are pretty flexible, and subject to last minute changes. I have been playing quite a bit of poker since my return from Exmouth, spending three nights in a row in the local pubs at the games there. However, things have not gone as well as they have in the past, and I have been busting out pretty early.

So when I found out on Friday that there was a regional final on today, I made a last minute decision to postpone the skydiving, and head for the poker tournament instead. I reckon I can fit in the skydiving goals at several points down the line before the end of the 100 weeks, but I only have so long before I will be in Las Vegas again, playing with my own real money.

I was offered a lift in a car to the event, but made another choice that surprised me, and opted for the motorbike instead. I have really been enjoying the bike recently, and Perth’s weather has only really let me down once in the three months I have been here. It has been a bit of a change not to have a car available to me, and I reckon I have done more kilometres on the bike in thrre months than in the previous year. Great fun!

However, by mid-afternoon I wished I had gone skydiving instead of choosing the poker tournament!! I did pretty poorly approaching the first break, and got one lucky big hand just before our table was split, which put me back in contention.

After the break I had a reasonably big stack of chips, and managed to lose the lot over the course of three disastrous hands, and was on my way home long before I had anticipated.

However, all was not lost, as there was one final event to try before I fly off on my next round of travels. I headed down to the local Osborne Park Hotel, where my poker career started just three weeks ago. The player numbers were down a bit, probably due to the finals earlier in the afternoon, but out of 33 entrants, and due to a few good hands and a couple of lucky breaks, I made it to the final table.

It was very exciting to make it to the final eight, and I was pleased to see a couple of other players leave the table before I did, eventually being beaten by a straight and finishing proudly in sixth position!

I think I am becoming a bit of a poker addict. It really can be almost as thrilling as skydiving! You can tell I am enjoying myself by the big grin on my face:- 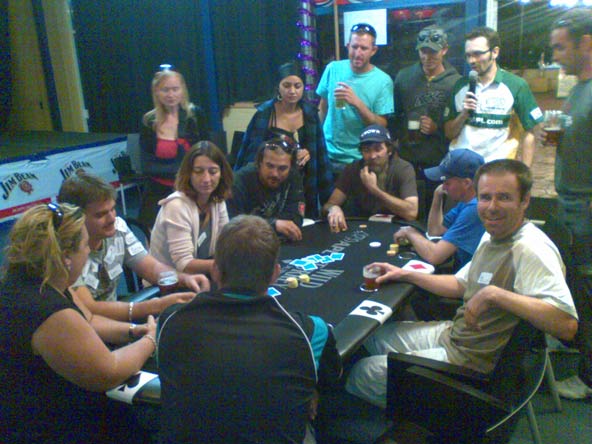