After leaving Monument Valley I crossed the border into Arizona, and drove about twenty miles south to Kayenda, where I finally turned west again, with the North Rim of the Grand Canyon as my destination for this evening.

However, once again, there are many points along the road worth stopping and looking at, and plans had to change as I realised that I would never reach the North Rim before dark. This really is an incredibly spectacular part of the country, and there is so much to see and do.

I stopped in the town of Page, and went to take a look at the huge Glen Canyon Dam and Lake Powell that it forms in the now flooded Glen Canyon. At the visitor centre a tour down into the centre of the dam was just about to start, and I hurriedly joined in. Some of the views of the dam and bridge, which is 700′ high, were fantastic.

After visiting the dam I made my way into town to fuel up again, and headed to the local RV park, where rather cheekily, I filled my water tanks, and following someone else through the security coded door, I enjoyed the luxury of my first shower in three days!

That evening I drove out of town and found a quiet little roadside pull-off with a great view of the flat plain below, where the Colorado River begins to cut its deep path which is soon to become the Grand Canyon not far to the southwest.

After a much welcome long lie-in, I hit the road and stopped for lunch at Navajo Bridge, where one of the original bridges to span the Colorado River still stands. There is a newer bridge now beside the original one, which was never designed to cope with today’s heavy traffic.

The original bridge is open to pedestrian traffic, and offers some beautiful views of the rafts on the calm waters of the Colorado River far below. I would love to come back one day and go rafting on the Colorado. The views from inside the canyon must be wonderful. 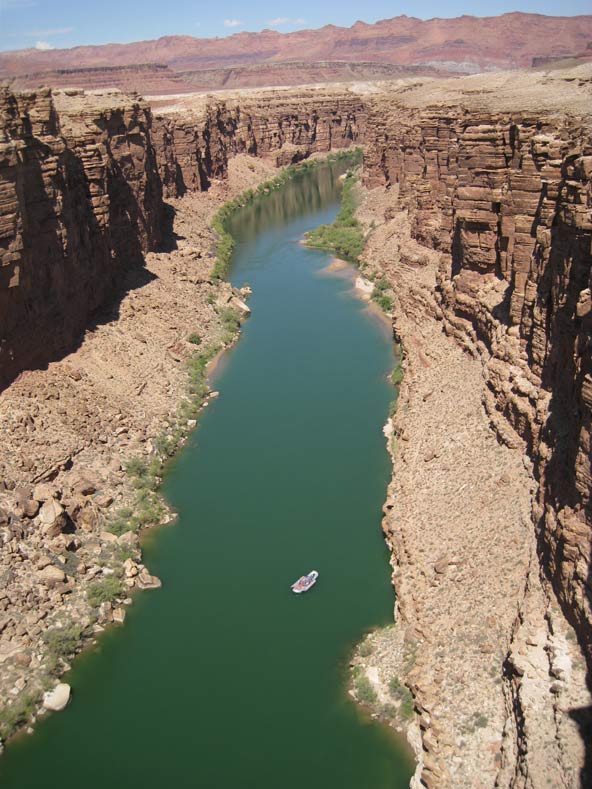 I eventually arrived at the Grand Canyon, which I visited last year in November, achieving Goal #14, although this time I was on the north side of the canyon rather than the south. Once again I am completely alone here, and like the last time I was here, the awesome majesty of sunset over such a spectacular location made me feel quite lonely and slightly melancholy.

I thought of the words from a song by Richard Ashcroft, called “Nature Is The Law”, whose lyrics are always best when he is at his most reflective:-

Old river,
And your restless wonder,
And your graceful leisure,
Rolling to the sea.
Many men have stood like I am,
Gazing out and wishing for someone.

It is slightly ironic, however, that it is not actually possible to see the Colorado River from the viewpoints at the North Rim Visitor Centre!

After the sun had set I had to drive back out of the National Park, as the campground there was full, and no other camping was allowed in the vicinity. Outside the entrance to the park however, camping is allowed in the Kaibab National Forest, and I found a very picturesque, secluded spot hidden away up one of the narrow forestry roads.